Around the Burgos Cirlcle, one can find a different kind of bar, a bar that caters for the sweet tooth-s. Instead of of serving alcoholic beverages, Bar Dolci serves different kinds of sweet temptations. I'm not a big fan of desserts but since it was my cousin's  (www.shootfirsteatlater.com) treat, I gladly took part. 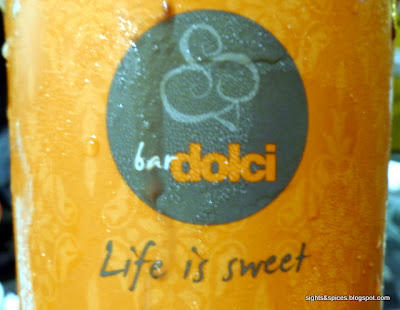 The place looks hip, alive and bright. Upon entering the store, it felt like being a 5 yr. old kid popping in a candy store. It was such a colorful place and with all the sweet goodies around the treats screamed "Take me, Lick me, Eat Me..!!!"

The bar serves different flavors of Gelato. A scoop would cost php120, two for php160 and three for php200.


What set Bar Dolci apart from other Gelato places are the unique flavors.


The Gelato was deliciously creamy and smooth. The Extra Dark Chocolate was divine, full flavored chocolate plus it was not intensely sweet. For a non-chocolate lover like me, I really liked this. The Pistachio tasted ok. The White Chocolate Wasabi is trully unique, some might get turned off but I liked it. When I took my first lick, the sweetness of the white chocolate  teased my palete then the wasabi flavor kicked in. I would have grin from ear to ear if the Gelato was spicy but it wasn't. Still, this was delectably quirky and unique.


The Macaroon spread was such an eye candy, it can be tempting to try every piece. A piece would cost php50 and if you buy four, you'll get another one for free.


After carefully selecting the flavors, we were all excited as we took our first bite. All of us were so disappointed, every flavor tasted the same. If you eat this with your eyes close, you won't be able to distinguish one flavor from another. 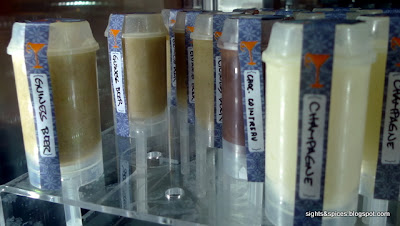 We initially got two, the Chocolate Contreau and the Tequilla Rose. I got so curious with the Guiness Beer that I had to get one. It was served in a popsicle tube container and you eat it with an ice cream spoon.

All three has a tinge of alcoholic smell and taste. Among all three, I found the Guiness the most interesting one, since beer in itself is not sweet at all. The Guiness  Beer Alcoholic Gelato tasted sweeter than bitter. One thing that me turned off was that the Alcoholic Gelato Popsicles has ice crystals in it, it tasted more like an ordinary popsicle. If I were the owners, I would not sell this as Gelato popsicles but just popsicles as it is.

I would definitely return to Bar Dolci and try out the other unique flavors of Gelato. As for the macaroons...forget about it!
Posted by Yaj at 14:17