Being known as Malaysia's food capital, I was extremely excited on trying out what Penang has to offer. Having been to southeast Asia countries before, I expected to taste familiar dishes but at the same time look for something unique and new.


We arrived late in the afternoon so after checking in our hotel, we quickly wandered off the streets to look for dinner. As the night creeps in, we saw food carts being set up as tables and chairs occupy the side streets and walk ways.


As we settled in one of the small alleyways, we quickly looked around and ordered food.
The very first dish we ordered was Char Kway Teow. A noodle dish that I've eaten countless number of times before but this was the best one by far. What set this apart from the other Char Kway Teow that I had was the smokey aroma and flavor that was instilled on the stir fried rice noodles. I assumed that it has to be the wok that was used again and again, its an aroma and flavor that can't easily be replicated

Upon finishing the noodles, I immediately went back to the food stall to give my compliments and to take a picture of the maestro behind the dish. The maestro was an elder who I think was in his  late 70s, he shyly smiled at me when I told him that it was delicious. As I was taking his picture, a man smilingly approached me and mentioned that the maestro has been cooking Char Kway Teow for more than 60 years. No wonder that it was this good. I apologize for not knowing who he is and where the small alleyway is. I hope someone who sees this can tell me where the actual place is and tell me who the maestro is.


We also had  Poh Piah, a Chinese fresh spring roll that's vegetarian. Stuffed with a variety of vegetables, tofu and peanuts. And Cheung Fan, a Chinese Rice Roll with shrimps inside and topped with hoisin sauce. Washing everything down with Tiger Beer.


***Important note when dining in alleyways and streets. As soon as you sit down on the plastic chairs and tables, someone will approach to ask what do you want to drink. ALWAYS order something, you might get booted out the table if you don't. Also NEVER EVER order drinks from another stall and bring it over to your table, always order from the person who asks you and let them bring the drinks yo you. From what I know, the tables and chairs belongs to the stall who sells drinks and each area corresponds to a specific drinks stall.***


While walking back to our hotel, we saw Lok Lok and decided to try it out. It's sort of a DIY shabu-shabu/hotpot right on the street. You pick out from the different seafood, meat and vegetable skewers then dip it in the communal pot of boiling broth. Topping everything off with your choice of sauce.


There was a highly recommended Char Kway Teow stall mentioned in blogs, this was Tiger Kway Teow. We got to try this for breakfast as well as a bowl of Hokkien Mee. Tiger's  Char Kway Teow was flavorful and delicious but it lacked the smokey aroma and flavor like the previous one we had.


The Hokkien Mee that I'm familiar with is stir fried, I was surprised to see broth in this noodle dish. I later found out that Penang's version is unlike the stir fried version found in other parts of Southeast Asia, they share the same name but different. The soup was a mixture of a salty, a tad sweet and spicy broth, topped with prawns, pork, bean sprouts and hard boiled egg.

It was a hot day in Georgetown, we saw a small kiosk that was selling coconut ice cream. There was a long line of people waiting for their turn and this made us decide to try it out as well. The ice cream tasted of real coconut, served with fresh coconut flesh and topped with whole corn kernels served on a half  coconut shell, delicious. 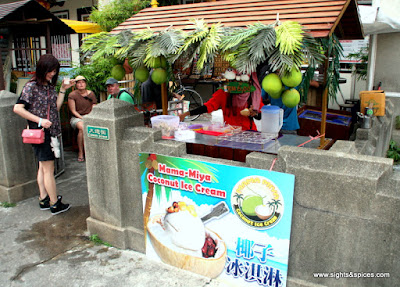 Mugshot is a well known cafe in Penang, we tried out their cold brew coffee and homemade yogurt. Coffee tasted ok. The yogurt was really good, it tasted fresh, creamy and sour. 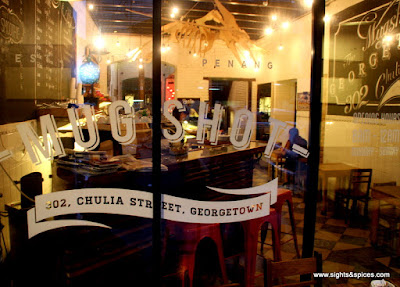 Mugshot
Add: 302 Chulia Street, Georgetown
Operating Hours: 8am to 12am


Being wine lovers, I got so excited to see a restaurant aptly called That Little Wine Bar. It was a nice and small cozy restaurant. Owned by a local expat celebrity chef,  Chef Tommes. Upon reading about him, I searched and watched a couple of videos of him cooking on the internet. He looked passionate and knowledgeable about food thus I had nothing but high expectations. 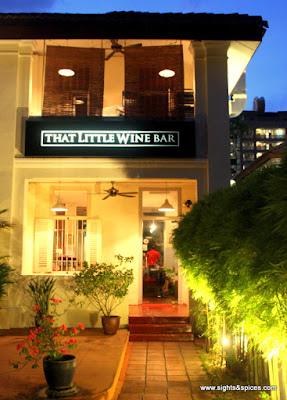 We were automatically drawn to the resto's impressive wine cellar. 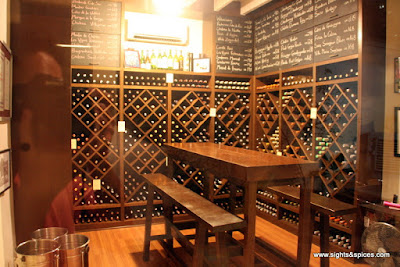 All of the dishes were of excellent quality, it wasn't anything fancy. Simple and tasty comfort food. My favorite dish would be the duck breast with cherry sauce, the meat was super tender, it had that bold strong flavor which was balanced out by the  sweet tangy cherry sauce. The dish complimented the wine we had.


We had two bottles of wine, one of which came highly recommended by Chef Tommes himself when we got to chat with him. 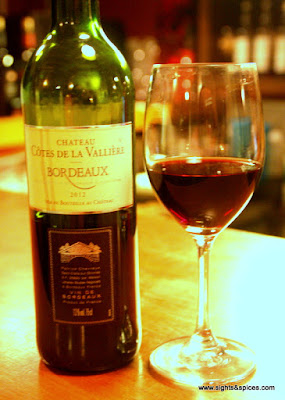 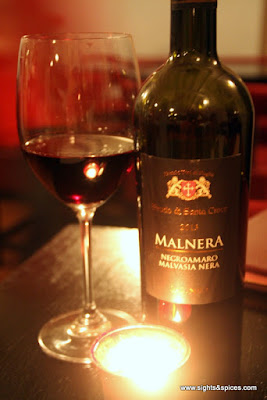 *Sadly, I think the restaurant has closed but still they are operating once a week for Wine Soiree Thursdays*

We didn't get to have dessert in the resto so when we saw a food cart selling cendol, we decided to give it a try. Made with rice flour jelly, coconut milk, palm sugar syrup and shaved ice. It was a cold sweet treat, too sweet to my liking. But for those who have a sweet tooth, this is a must try.

The next morning, being still full from the previous night. We opted to have a light breakfast, we ended having bread from Yin' Sourdough Bakery and Cafe. We got to try a few of Yin's bread which was all sourdough based, all of which are moist and dense inside. Being a bread lover, I enjoyed the bread I tasted here. Sadly on the day of early departure from Penang, the bakery was still closed, I would have brought home some. 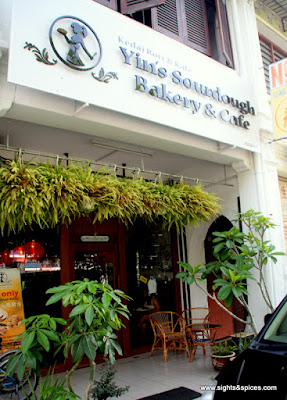 
I had asam laksa before and I have to admit that I'm more of a curry laksa fan than of asam laksa. When I saw Anthony Bourdain (rest in peace) slurping Air Itams's laksa with uhmms and ahhhs and claiming that it was astonishingly delicious in his previous tv sereies, I wanted to give it a try. 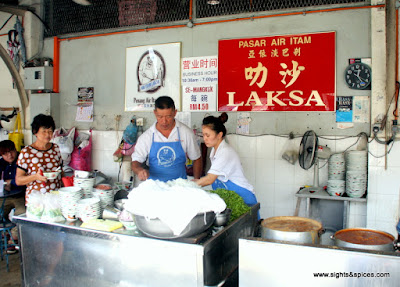 It was love at first sip, it was tangy, spicy and filled with so much seafood flavor. I cant pin point on what made it so good, the broth was filled with so much umami goodness that it made me take one spoonful after spoonful of  the rich broth. This was totally different from the asam laksas I had before, I'm so thankful and glad that we got to try this place out. 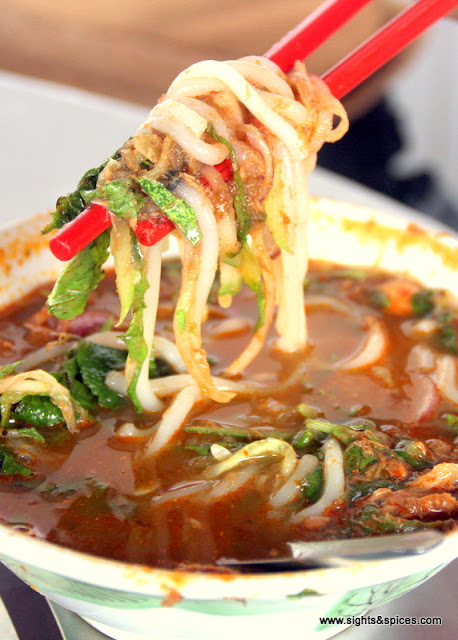 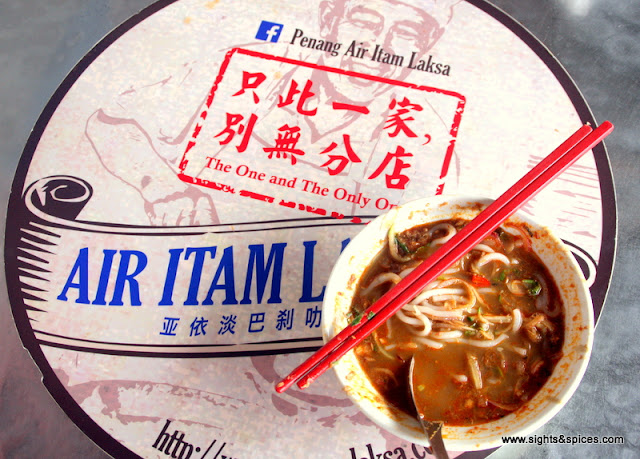 
One place that Bourdain also ate at that got my attention was Nasi Kandar Line Clear, open 24 hours, the famous food stall can be found in an alleyway. The thing that got me so curious was how the combination of sauces of the Indian rice topping meal would taste like.
.


A heap full of rice is place on a plate and you pick which among the numerous dishes you want.
They would topped the rice with all the food choices you picked and what made this unique is they would get different sauces from each dish and pour it on top of your rice topping. 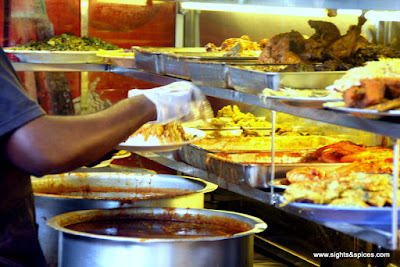 In our case, we picked out the Fried Chicken, Squid in Sauce and Stir Fried Vegetables. After piling it up on our plates, I counted 5 spoonfuls more of sauces added to our heap. I don't know from what dishes that sauces are from but the end product looked like the picture below. The chicken, squid and veggies has its own distinct flavor, mixing and eating everything together brings about a very intense burst of different pleasant flavors in the mouth.


One of the fascinating cuisines I got to try when I went to Malacca was Nyonya.  When we saw that Penang also serves Nyonya cuisine, we made an effort to go and eat at Ivy's Nyonya Cuisine. 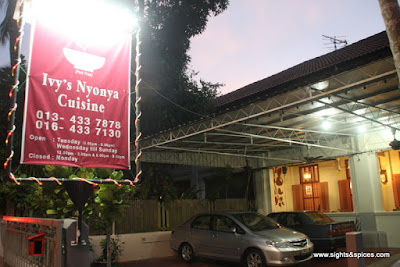 We were welcomed warmly by owner and chef, Mr. Dragon Tan. He suggested to try out the set menus which we happily obliged. The set consists of Baby Stingray, Joo Hoo Char and Assam Prawn, Kiam Chai Ark, Kapitan Curry Chicken and Dessert. 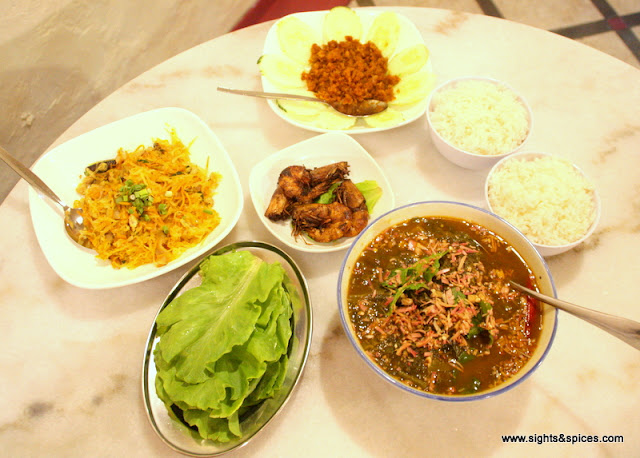 Everything were of excellent quality, even if I had Nyonya cuisine in Malacca before, most that tasted new and unique. While eating, I was already wondering why the flavors were so different. Luckily I was able to ask Chef Dragon why it tasted different as he chatted with us after cooking in the kitchen. The answer was simple, he said that it was geography, Penang is nearer to Thailand, thus the flavors  were more of  of the herbs and on the sour side while Malacca is nearer to India thus the flavors are more about the spices. 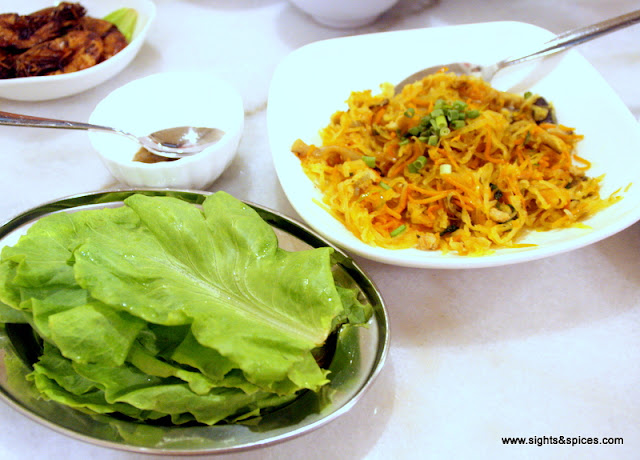 I would have love to try out all the unique Nyonya cuisine in Penang that Chef Dragon was telling us about, maybe in another trip to Penang, I'd definitely go back to eat here.


One of the most common food stalls that can be seen around Penang are the Yong Tau Foo stalls. It is also similar to the Lok Lok stall where you can pick from a variety of noodles, toppings and broth you like to make up your bowl of noodle soup. You can also have the noodles stir fried. It's simple, fast, relatively cheap and most importantly tasty meal you can find around Penang. 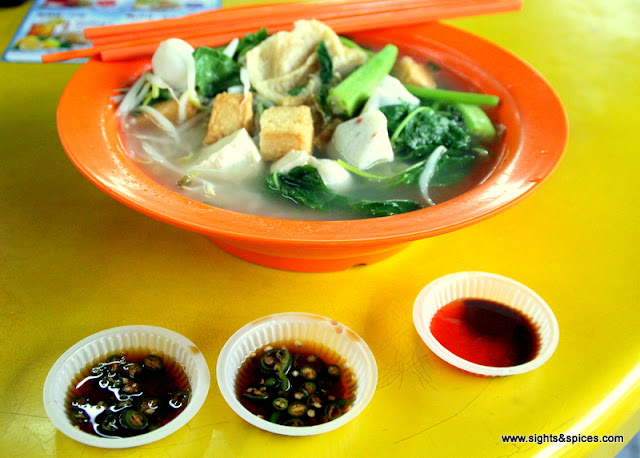 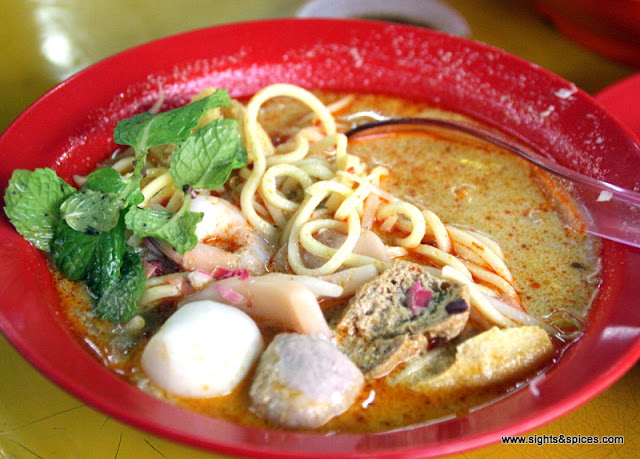 When I saw Macalister Mansion's picture on the internet, I was awe struck on how beautiful the placed looked like. Upon checking, the majestic mansion was a hotel, a restaurant, a tea salon, a whiskey/cigar bar, a wine lounge and it even has a pool bar.


Wanting to see the mansion, it was either a choice of dining at the restaurant or having wine at the lounge. We ended up doing the latter. The mansion looked really luxurious from the outside and inside. We had a bottle of Rioja Reserva and some finger foods to go with it.  We were not planning to try out any wines from the enoteca machine until we saw a bottle from Lebanon. I've never seen or even heard of Lebanese wine before. Out of curiosity w to my surprise the wine was really good. 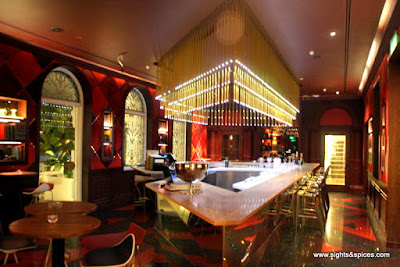 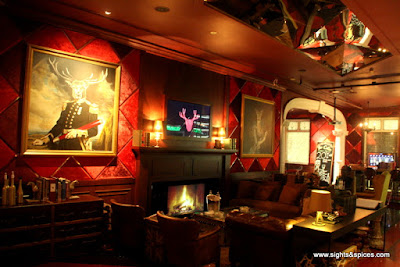 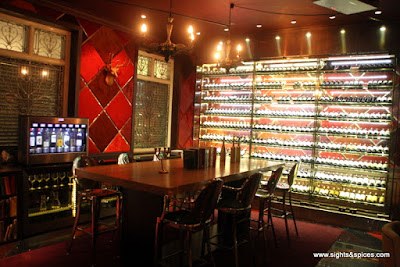 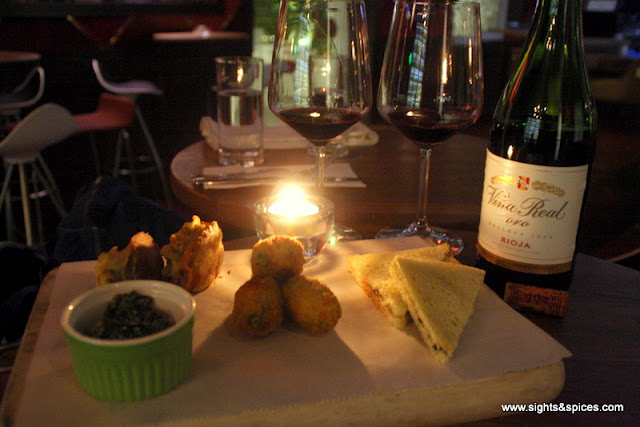 There were quite a number of wine bars/lounges around Penang and we were so glad that we were able to check this out.


We thoroughly enjoyed pigging out Penang, some flavors were already familiar and there were quite a few nice surprises as well. One thing that I'd remember Penang by are the master chefs behind each food stall. Whether its grilling, stir frying or scooping a ladle of broth, one taste taste of their masterpieces screams their love and passion for  food.