When the weather got really hot and humid during the summer season this year, it was off to the beach. Just having a weekend to spend on the beach, we decided to look for places in Quezon which was relatively near. After scanning and browsing the internet, we ended up going to Padre Burgos. The idea of being able to check out different islands charmed us.


Journey begins by riding a 3 to 4 hour bus ride from Buendia to Quezon Grand Terminal. From the terminal, we proceeded to look for a bus bound for Unisan. We told the conductor to drop us at the drop off point going to Borawan Island and he recommended to hire a boat at May Ann Store.


We got dropped off right in front of the store and met Tess. She entertained us, gave us the rates and details on what to expect on the island. Aside from the boat, they offer everything that one will need if you plan to spend the night on the island like food, water, utensils, candles, etc. There are also different places you can stay in if you're not up for spending a night on an island. Here are the rates for the boat. 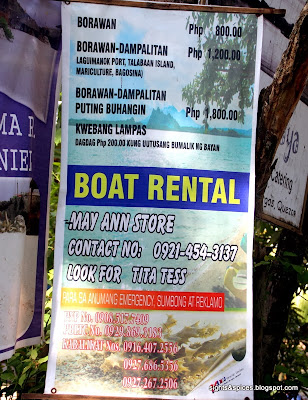 After having a quick breakfast at the store, we were off to the first of three islands that we visited. Puting Buhangin beach was the furthest so the boatman recommended that we head there first. Our boatman told us that there was an undergoing dispute on the ownership of the island. There was an entrance fee of Php50 collected as soon as we docked. The beach was already packed with people when we arrived. Sand was grayish white in color and the water was clean and clear.

This island is also known as Kwebang Lampas or literally translates to Cave Beyond in English. This is one unique natural feature about the island that I really enjoyed. You make your way in from one side of the cave, walk atop rocks in knee deep water and you can choose to make your way out on the other side.

It's exactly what we did, we entered form the cave opening near the shore, exited on the other side and swam all the way back to the shore. For non-swimmers, one can opt to go back from the entrance, water was deep and it was a good five to ten minute swim. 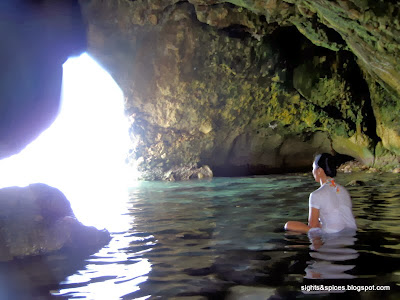 Before heading back to the shore, we snorkeled around the area, there were only a few fish and it was evident that the locals practiced illegal fishing before. The sea bed was filled with powdery white crushed rocks and corals. 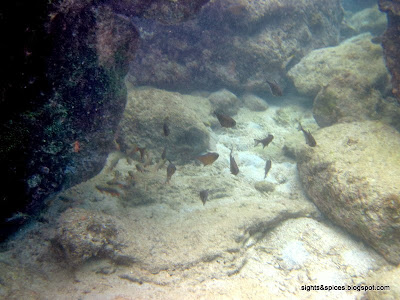 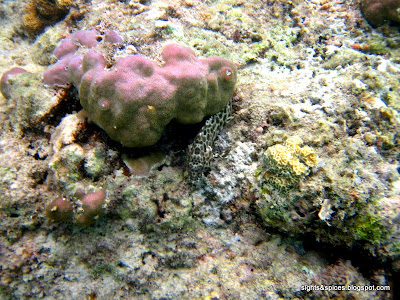 The next island we visited was Borawan, an island known for the huge rock boulders. Among all the islands, the locals seemed to deem this as the main attraction of Padre Burgos. Borawan Island was indeed beautiful, the boulders looks so grand and magnificent. 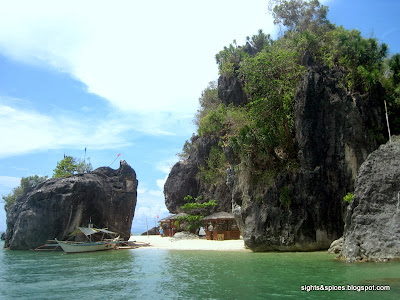 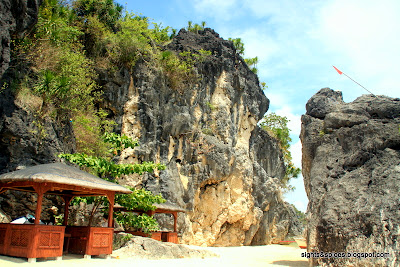 I've read people actually doing rock climbing here but I'm not sure if it's still allowed nowadays. We did manage to climb atop this one though. 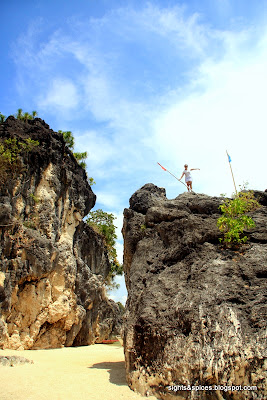 This island used to be bare with nothing on it but when we visited, it saddens me that the island has been turned into a commercial zone. Huts, bathroom stalls, shower areas were built around the short shore.  Though the island looks clean because it's well maintained by a staff, I would have still wanted to see and experience Borawan pure and unadulterated. 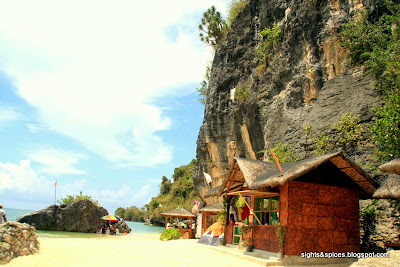 As expected by our boatman, the island was packed with so much people. And because of it's short shore, the island felt too crowded. Here are the rates for Borawan Island. 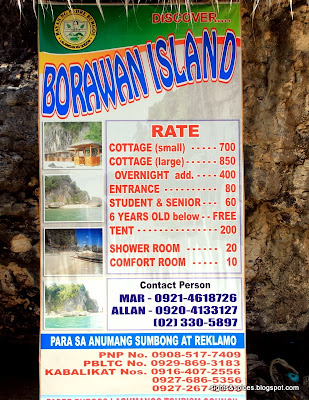 We didn't like the crowd so we decided to camp out in Dampalitan Island since this is the biggest among the three island. I got to admit compared to Puting Buhangin and Borawan, the sand and water in Dampalitan is not as nice but it has its own charm.

Just like the other two island, there is also an entrance fee of Php30. One can pitch their own tents, rent tents or rent a nipa hut. It's best to bring your own tents since the tents and huts for rent depends on the availability. Spending the night there with your own tent would cost Php150, renting a tent cost Php250-300 and renting a hut cost Php600. 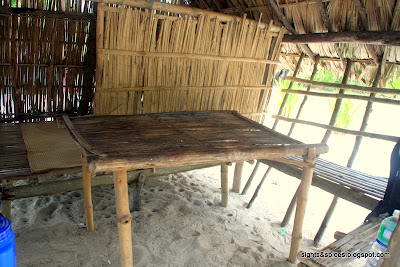 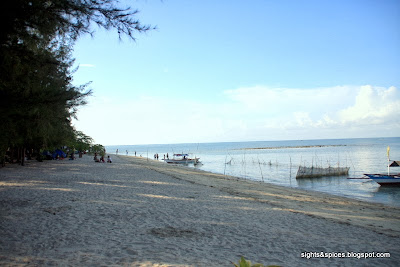 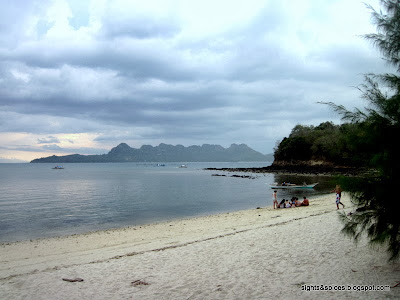 When the low tide sets in before sunset, make sure to make your way to rocks on the left side (facing the sea) of the island. It was nice walking atop the rocks and spotting sea dwelling creatures in cracks, crevices and under the rocks. 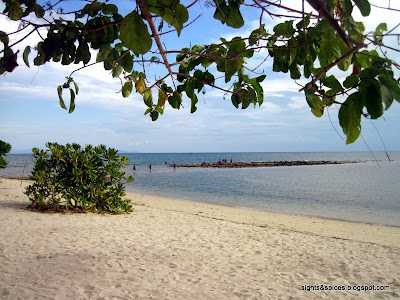 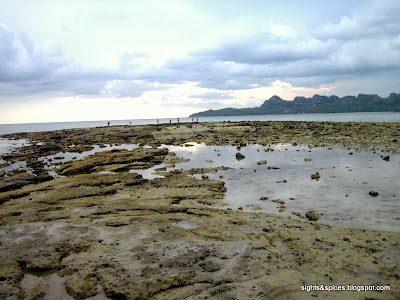 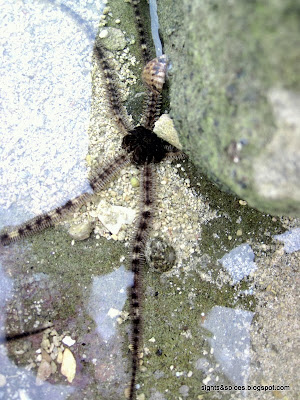 Just a few steps away, you can also see mangrove tress from this area. 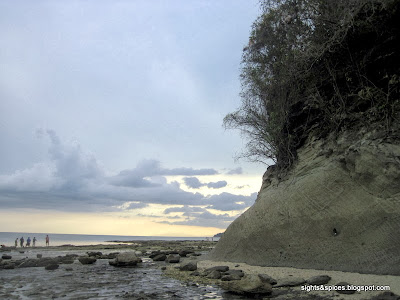 The whole island has only two bathrooms which is shared by everybody so don't expect it to be clean. There is no running fresh water, you have to buy it at the small store near the bathrooms. Sold in different water containers prices of water ranges from 50php for a small pail to 350php for a big drum. Don't expect water to be always available, they do ran out.

If you're planning to spend a night here, make sure to bring lamps and flashlights, there is no electricity on the island and it gets really dark at night. Bring drinking water and food, you can't really be sure if the store has enough food and bottled water in stock. Prices would also be really expensive. Also make sure to put on insect repellent at night.

Beach camping wouldn't be complete without setting up a bonfire. We bought chopped branches for 30php from the store and shared the bonfire with the local children.

The next morning we took a dip again before leaving the island. Since it was high tide, I enjoyed the water more compared from the afternoon before. Before noon, we were picked up by the bangka and we headed back to May Ann store where we ended our beach camping adventure with a nice long shower and a full meal.


Beach camping is not for everybody, it can be tough for some specially when one is used to the comforts of a room. I've beach camped before and I personally feel that I can only spend two nights beach camping max because I would need a clean working toilet. But it's definitely one nice experience that's worth doing over and over again.