Macau basically has two kinds of cuisine. Cantonese and Portuguese food. Since Macau was once a colony of Portugal, a lot of street names and signs are still in Portuguese. It also influenced Macau's food culture. The easiest way to describe how Portuguese food is, it is essentially like Mediterranean cuisine. Portuguese also uses a lot of olive oil, olives and herbs in their dishes.
We were walking along the river when I saw all these fish hanging. Portuguese people loves to eat fish cooked in any way, one of the famous fish preparation in Portugal is the Bacalhau. A cod fish which is salted and dried. Im not sure what kind of fish is shown here but it definitely smelled salty and looked all dried up. Just one of the many influences of the Portuguese to Cantonese food.


There's an alleyway leading up to the Ruins of St. Paul where all you can find are different Chinese Deli selling different kinds of Biscuits and Meat Jerkies. The most popular biscuit is the Almond cookies. The biscuits are usually small and round in shape. You don't even have to buy one to taste one because as you pass by this alleyway, a lot of vendors would shove you free samples. It's crunchy and crumbles ones you bite into one, it best to eat these sweet little treats with tea.

Macau has a lot of Buddhist temple and we stopped by one that has a restaurant which obviously serves vegetarian dishes. The Poh Tai Un Temple. I have eaten vegetarian temple food before and frankly I am not a fan. I love my vegetables but the dishes found in temples are usually bland for my taste.
Address:  Taipa Island, Macau

Besides the restaurant there was an area filled with wooden sculptures. The wood used were big old tree logs. The sculptures were intricate and beautiful, just look at the minute detail in each sculpture.


When the lady monk came out, she was all smiles and was laughing because she was told that she'll be posing for a picture but as soon as I held up my camera and told her to smile...this is how it turned out. I guess monks can't show any emotions specially when captured....

Nga Tim Cafe is like a hole in the wall restaurant where you dine al fresco under the trees. A perfect place to relax and unwind. Delicious food to pair with your favorite wine or beer.
Address:  8 Rua Caetano, Coloane 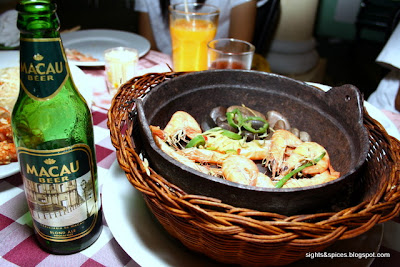 The live bouncing shrimps were soaked and marinated in Portuguese white wine, thus it was called Drunken Shrimps. After a few minutes the live shrimps were transfered into a clay pot and cooked in sauna stones. You can see and hear the steam coming out from the clay pot as the shrimps were being cooked.  What's so cool about this dish was everything is happening right in front of you. The shrimps were absolutely divine, the most tender sweetest freshest tasting shrimps i ever had.

The Fried Fish Sticks was delicious. Cooked to a perfect crisp with tender pieces of fish inside topped with garlic and chillies. Yum!

Shrimps drenched in a rich sweet and salty buttery sauce. 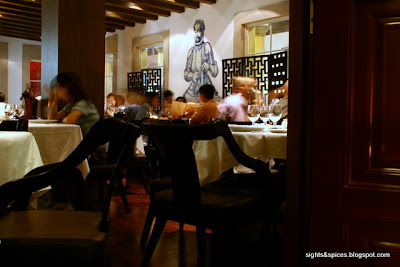 The appetizers also came with Brushcetta and Crab Dip.

Creamy Crab Rice. It has the consistency of a risotto and the flavor of a paella. The taste of paprika is very evident in this dish.

The Meat and Seafood Skewer came out with nice charred grill marks.


When I tasted the shellfish, I sense a tinge of sweetness in the dish. I told our guide that the shellfish dish will be loved by the Filipinos because of its spicy, salty and sweet sauce. He went inside the kitchen and moments later the chef came out. I didn't have a clue what they were talking about because they were speaking in Portuguese. It turned out, the chef unintentionally added sugar in the dish thinking he was adding more salt. The chef apologized for it but I told him, the dish was still absolutely delicious. To that he said:  "Through our errors, we create new dishes.." After saying that phrase, I gave him a two-thumbs up. 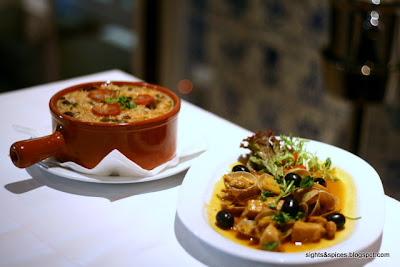 Restorante Litoral serves fusion cooking between the two basic cusine found in Macau. Macanese, Cantonese meets Portuguese. The flavors were really interesting, the combination of sweet and salty flavors, the use of mediterranean herbs in Chinese dishes. The end of all of which, is a very satisified palete.
Address: Rua do Almirante Sergio, 261A

For appetizers, we were served Squid Salad and Potato Croquettes. The squid salad was a cold appetizer, squid was buttery soft when you cut thru it. It has a tangy citrus flavor, the olives added the saltiness to the dish. The Potato Croquettes was crunchy with a nice moist filling.


The African Chicken dish is one of Macau's perfect example of the influence of Portuguese in Cantonese cooking. It has chinese 5-spice powder as well as rosemary in its marinade. Now that's what you call east meets west.


The Baked Duck Rice reminded me of paella.But only this one is served in a clay casserole. It has strips of duck inside the rice plus chinese chorizo and pork belly on top. It tasted ok. My least favorite from all the dishes. 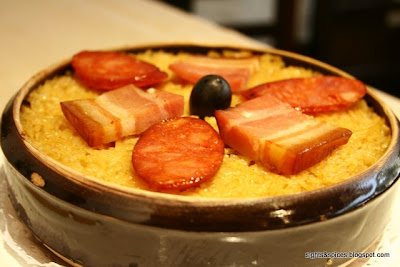 Seradura is one of Macau's well known dessert. It means Saw Dust Pudding, it is basically cream with crushed cookies and chopped peanuts on top. A simple sweet fluffy light dessert.

Of all the restaurants that I went to, Macau Tower's 360 degrees Cafe was the most disappointing when it comes with food. The only cool things about this place is that the dining area literally revolves around so you'll get a different view every five minutes or so.

The highlight in the meal is that I got to drink Vhino Verde again. A Portuguese Green Wine. It's not considered a red or a white. It is called green wine because it is a wine that's supposed to be drank young. It is not considered a sparkling wine but you'll notice tiny bubbles evaporating from your glass. It has a light sweet citrus taste. i enjoyed this wine so much and I am still on the look out for this kind of wine back here.


The Circular Dome on top spins around to give you a 360 degree view of Macau.

Just looking at it makes me salivate and want to have one.

Sights: The other side of MACAU

Most people I know go to Macau to visit The Venetian but Macau is more than the casinos and The Venetian. Across the big casinos are a lot of different sights to see and things to do....

Macau locals consists of Chinese and Portuguese people. Buddhist and Catholics co-exist peacefully, the two places of worship are a perfect example.


In Macau, you can see this sign and area all around the city. W.C. stands for Water Closet. Ain't this city perfect for pet lovers?
Macau made a theme park, it is near the big numerous hotel casinos. It was supposed to be a place for children to stay and play at while their parents are off to squander their money. But as the tour guide told me, the park was a big failure. The place was deserted when I was here. Entrance is free of charge.


Here are some of the sights you can see inside the Fisherman's Wharf: 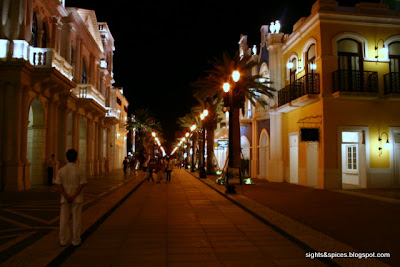 Macau Motor Sports Club boasts of a 1.2 km race track that is actually being use for International Competitions. Tourist can rent a go-kart and test their driving skills. This definitely is a must try!!!
Adress: Estrada de Seac Pai Van, Coloane, Macau

This is also one of the places where all the tourists go. The majestic grand Macau Tower. There are a number of things you can do atop the tower, the most famous of which is the Sky Jump and the Bungee Jump.


Hak Sah Beach. It literally translates to Black Sand Beach. The sand is said to have healing qualities.


Senado Square is known to be the 'posh' shopping district of Macau.

The ruins of St. Paul was built by the Jesuits in the 1600s. This is what has remained of the largest cathedral before. 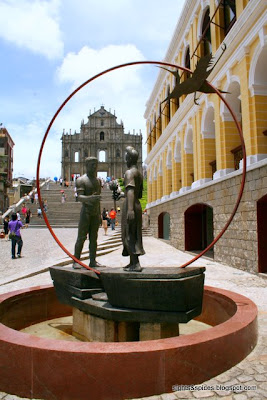 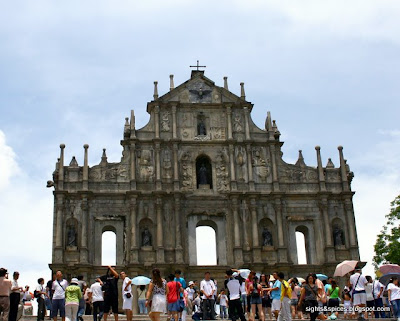 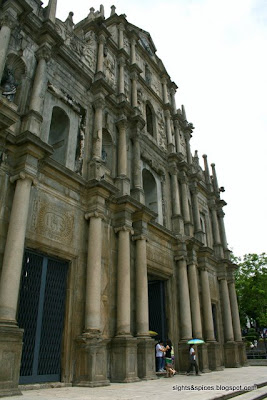 The Grand Prix Museum. Macau annually holds different international racing events. The most famous of which is Formula 3 racing.

Across the Grand Prix Museum is Macau's Wine Museum. You can find different Portuguese Wine and a little Chinese Wine. The most notable Portuguese wine is the Vhino Verde which means Green Wine. It doesn't really looked green, it is just not of the red or white variety. Though it is not considered a sparkling wine, you can see little bubbles coming out from the wine. It has a tinge of sweetness, very light and refreshing. This is the first and only time I have tried Vhino Verde and I am still on the look out for this kind of wine. 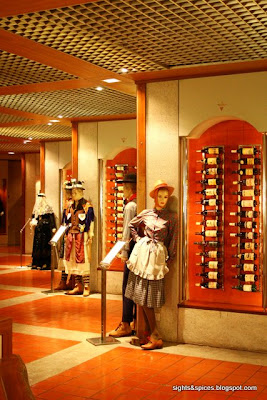 Macau is definitely more than just the numerous casinos and the Venetian. It has a lot of things to offer but for me Macau is a place that once you visit, you won't be yearning to come back anymore.
Posted by Yaj at 13:49 0 comments