When Chicago was playing in Solaire last year, we took it as a chance to dine in the much talked about Finestra, the Italian signature restaurant of the hotel.


One of the good things I kept reading about the place was how nice and grand the restaurant looks. It was really grandiose inside, high ceiling, carpeted floor, sparkling chandeliers, everything screams of class and elegance. Did I personally like it? Not so, it was too grand for me. It felt like I was attending some kind of a banquet function. I still prefer the small cozy, comfy and homey feel of restaurants.

As soon as we took seats, a basket of wonderful looking breads was placed on the table. All of the breads were excellent but one stood out, the cheese bread. The cheese bread had that slight crunch with a super moist center plus it was so cheesy.


The restaurant offers an extensive wine list, they offer wines from different wine regions and prices range from 1,000 to 10,000 a bottle. We settled for a bottle of Pinot Noir from Burgundy.


To start we had the Zucchine Timable, the dish consists of pan grilled zucchini, grilled eggplant, cherry tomatoes, buffalo mozzarella with a rustic tomato sauce. We pretty much enjoyed the simple dish as it tasted nice and fresh. The best thing about the starter has to be the buffalo mozzarella, it was the real thing. I've only tasted it once in a wine event, I've tried to go to delis who claims to have it but more often than not they always ran out.


We decided to try out their risotto of the day which was the Bianco risotto. It was pretty basic as it consists of reggiano and fontina cheese with shave truffle on top. The risotto was simple and delicious, the arborio rice was cooked perfectly as it just had the right textute and consistency.

An Italian Meal wouldnt be complete without pasta, we ordered a plate of Bombardoni. It was my first time to see pasta tubes this big. the server told us it was called Pacherri. The pasta came with lobster and roasted heirloom tomatoes 'marinara sauce'. Cooked really well, the pasta was al dente, the small chunks of lobster tail tasted fresh and the sauce was superb. My only gripe about the pasta dish is that it wasn't worth its price. The serving was small, it had around 4 to 5 pasta tubes and there were only a few small pieces of lobster tail.

For our main course we had the Branzino Aqua Pazza, a seabass dish with pomodorino pachino, olives and mashed potato. Upon doing some research, pomodorino pachino are cherry tomatoes that comes from Sicily. The tomato puree complimented the seabass really well as it didn't overpower the flavor of the fish. Simple, fresh and delicate. Even though the seabass was a tad bit overcooked, it was still exquisite as it tasted so fresh plus the skin was crispy. Mashed potato was smooth and creamy.  Again, my gripe would be the size of the fish, it was too small to be consider a main course. You can down it in two full bites.


I enjoyed my meal in Finestra but felt that it was overpriced. The food we tried were great but it wasn't really extraordinary that's worth its price. Some might say that you are also paying for the ambiance but I'm not really concern about a restaurant's atmosphere, food is still priority.  I would still love to go back, the cheese bread is to die for and there are wines that I would want to try. Maybe next time around I would go with a bigger group and order the resto's family style dishes. 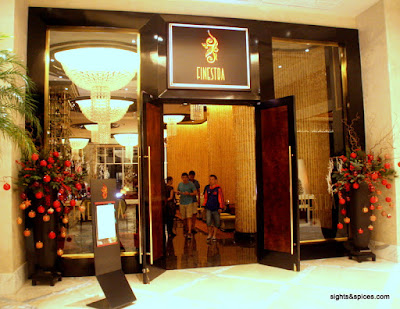 We got to visit and dine at Locavore during their soft opening and this was more than a year ago. I was kind of hesitant to dine here before since the place exudes more of a bar vibe than a resto atmosphere.When the restaurant was fully operational, we tried to dine here again and on both occasions, the line outside was way too long.

The resto's Kinilaw or Ceviche are among its bestsellers. They offer Fresh River Shrimps, Kalibo Oysters, Tuna, Tanigue and Lapu-Lapu. We decided to order the Kinilaw Platter that consist of three choices, we picked the Fresh River Shrimps, Kalibo Oyster and Tuna. I was expecting the typical mouth puckering sour vinegar based sauce for the kinilaw but to my surprise each kinilaw has different ingredients in it.

The Fresh River Shrimps has green mangoes, calamansi, patis (fish sauce) and wansoy. The Kalibo Oysters has the typical cane vinegar, shallots, ginger, calamansi, red bell pepper and wansoy. The Tuna has wansoy, green and red bell pepper, ripe mango and red chili pepper flakes. Each Kinilaw was absolutely fantastic, it didnt taste anything like the typical Filipino kinilaw. It tasted smooth and flavorful, no mouth puckering sourness. Among the kinilaw dishes, the tuna concoction is my favorite, I enjoyed the play of sweet and spiciness in the tuna.


The Pusit ala Pobre might looked simple but it was delicious. The squid was perfectly cooked as each piece was soft and tender. The squid ink was filled with so much malinamnam goodness, it had the right balance of sour, salty and sweet. I'm guessing that they add a little coconut milk to the sauce. The addition of ears of garlic confit was an added bonus to the already tasty dish.

The Tortang Talaba is basically fried breaded oysters. When it comes to eating oysters, I like them raw. I wasn't expecting to enjoy the Tortang Talaba until I took a bite, it was pretty good. It was lightly coated which instilled a slight crunch, the best part are the oysters, it still had that fresh slimy raw texture. Just make sure to eat it at once when serve, since the coating is thin, it gets soggy when it gets cold.

The Gising-Gising was cooked well, the vegetables had a nice crunch and the gata was thick and creamy. I wished it was spicier, even after adding all the chili oil, it still wasn't spicy enough for me.

The Garlic Rice that went with our meal was really good, the stir fried rice wasn't oily, it taste of garlic and the crunchy garlic bits added a nice crunchy texture.


The resto prides itself of their cocktail concoctions but being wine lovers, we opted to order one of the only two bottles that they offer. I do hope that they have already expand their wine offering. 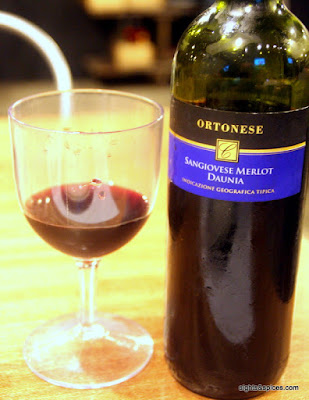 For dessert, the server insisted we order the resto's version of the Leche Flan, we obliged. The dessert looked promising, on the plate was a golden flan, slivers of orange and a jigger of caramel. Taste wise it was good but texture wise, I didn't like it, it was too airy. I like my flan dense yet creamy. 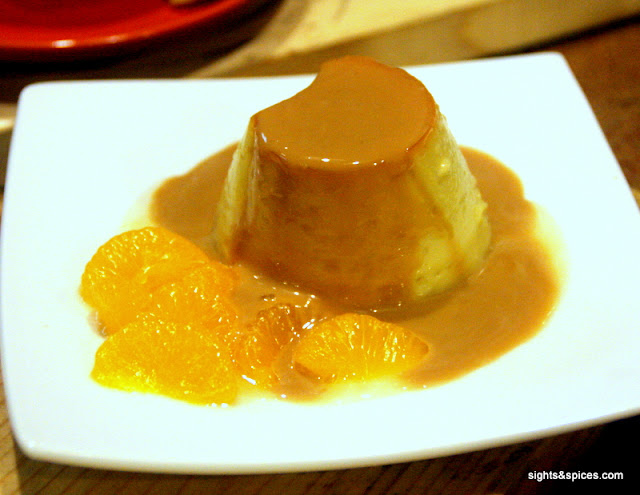 As I've mentioned, I tried to dine here again but never got to because of the long line. From how it looked, the place seems to be flocked by bar hoppers and not by diners. I'm hoping that the taste and quality of the food hasn't change cause I will still try to go back and dine here again. 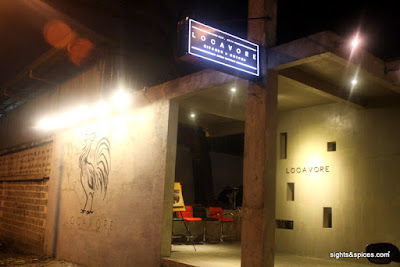