Sights: The Amazing Wonders of Nature in El Nido, Palawan

When going on trips, we always booked our airplane tickets first before everything else. But this time around, our El Nido trip came by when I was offered a sponsored accommodations in Corong Corong Beach, El Nido, Palawan.

(I would like to thank Ms. EMC for sponsoring our accommodation at The Beach Shack, a beachfront property in Corong Corong beach.)


Since it was kind of expensive to fly directly to El Nido from Manila, we opted for the longer route. We flew to Puerto Prinsesa then rode a van  to El Nido. As soon as you stepped out of the airport, you'll be crowded with people asking where you're going. They will proceed to point you to the right van to ride on. Since it was a pretty long 5 to 6 hour trip to El Nido, we opted to go via Daytripper. It was a little bit more expensive but we had the whole back of the van to ourselves thus making the travel more comfortable. 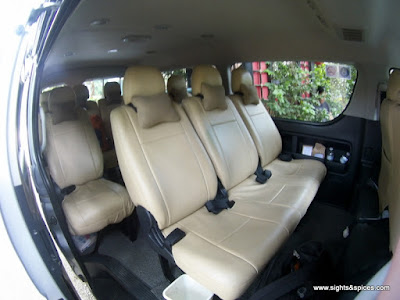 The shore at Corong Corong beach was pretty short and was filled with lawn chairs with mostly foreign tourist sunbathing. Tough if felt crowded, the shore was really clean and the water felt so refreshing. In spite of being sleepless, we spent the whole afternoon  swimming and lounging around. We also felt lucky that we got to stay at a beachfront property. Most accommodations in El Nido can be found at the town proper, though there was a shore, no one swims in the waters since there are a lot of boats parked near it.

Since we only had 2 full days in El Nido, we picked out two island tours from the four choices. We started our first morning with Tour A, which consists of going to Secret Lagoon, Small Lagoon, Big Lagoon, Shimizu Island and 7 Commandos Beach.

The site of the huge limestone cliffs in El Nido made me really excited, this is what El Nido is famous for. It was majestically beautiful and little did I know that there more to it than just a facade.

Our first stop was Secret Lagoon, a small open area with knee deep high waters that is surrounded by limestone cliffs.


As we were approaching Shimizu Island, the engine of the boat we were riding suddenly conked out. Luckily we were already nearby so we just jumped out and swam our way to the island. We had to wait for another boat to continue our day tour so we had the liberty of time of snorkeling around. We also ended up having an early lunch here. 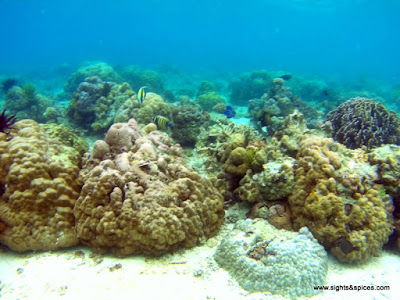 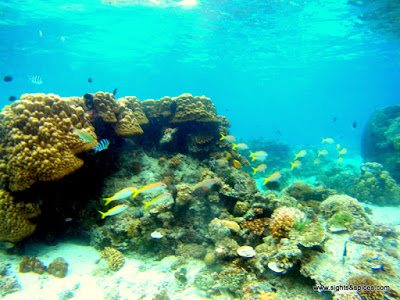 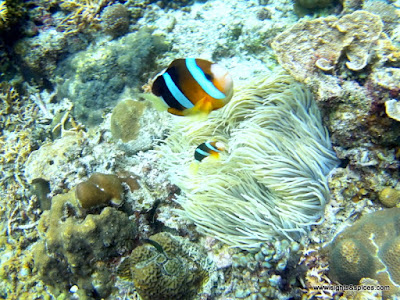 Lunch was part of all the tours, the menu usually consists of grilled seafood, grilled meat, fresh veggies, rice and fruits. Simple and so satisfying. The boatman or the guide does the grilling on the boat while going from one island to another. Please clean up as you go!!!

After lunch we were off  and were greeted by emerald crystal clear waters as we made our way in the Big Lagoon. Boat goes in between the cliffs  and exits on the same opening.


Getting inside the Small Lagoon was more of a challenge, you either go inside via swimming or a kayak. Since we were dying to hit the waters, we chose the first option. Just a word of advice, it was a pretty long swim so make sure you are good swimmer if you chose to swim in and out of the lagoon.

Our last stop for the day was 7 Commandos Beach. It was just perfect for us as we were all exhausted from swimming in and out of the small lagoon. The beach felt so laid back, we found ourselves laying down on the fine white sand and on the hammocks installed in one area. There was also a small store selling snacks and refreshments.

The next day we were off to Tour C which consists of going to Secret  Beach, Hidden Beach, Matinloc Shrine, Star Beach and Helicopter Island.

As we were getting near a limestone cliff, I was wondering why there were some boats anchored in front of the cliffs. There were was no visible shore around and I thought this might be a snorkeling area. But when the boatman told us that this is Secret Beach, I wondered and was puzzled where the beach could be.

We jumped out of the boat and the guide pointed us to a small opening in the cliffs.  At the entrance of the hole, there was  a person stationed who served  as sort of the gate keeper. He would hold and  pull in those who are entering in perfect time to the splash of the waves.

For good swimmers, one can just go underwater and swim in to avoid the forceful splash of the waves on the rocks.

As soon as I got up from underwater,  a patch of shore with sand welcomed us. I was so baffled and amazed on what I saw. Right on the middle of the ocean, inside the limestone cliffs was a beach, Amazing!

It also needs perfect timing to go out of the hidden beach. As soon as the waves hits the rocks, you quickly have to get out before another waves crashes.

Hidden Beach is somewhat similar to Secret Beach, going here takes a little longer as you need to swim and trek a little.

Hidden Beach has a wider shore thus there were more people lounging around the cove. Both Secret and Hidden Beach gave me a sense of astonishment, didn't even know that such beautiful places existed.


There weren't any shore lines or beach area in Matinloc Shrine, what's memorable about this place is it gives you another perspective of El Nido. Climbing and looking from the top, you can see the stunning emerald waters with its surrounding limestone cliffs. What a beauty!


After visiting the two mysterious beaches, Hidden and Secret Beach, I was still speechless on what we've experienced. It was an experience that was hard to top. But if I would pick which beach/island is my most memorable, it would be this small beach area near Matinloc. I don't remember what the place is called, I just remember that Matinloc was crowded and the guide suggested to go here. The main reason I fell in love with this small patch of island is that we were so lucky that we got the whole place to ourselves. 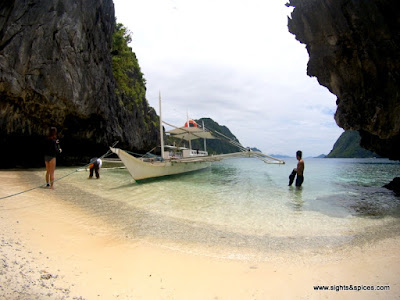 Super fine white sand, crystal clear refreshing waters and a few steps away from the shore are the colorful lively corals. I couldn't ask for anything more, everything that I want was here. Paradise. 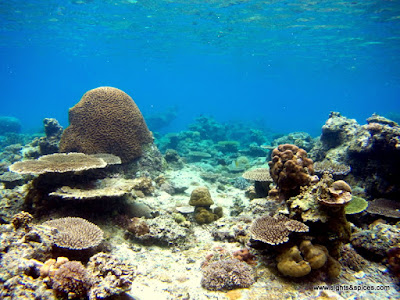 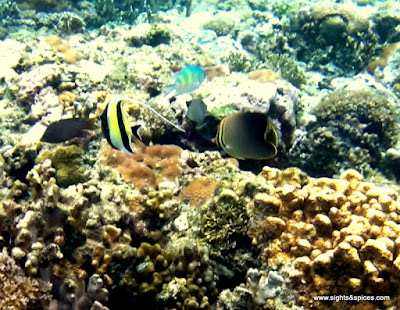 As an extra treat, we also had lunch here. Nothing beats the feeling of sitting on the sand with a plate on hand eating while looking at the gorgeous view from shore. 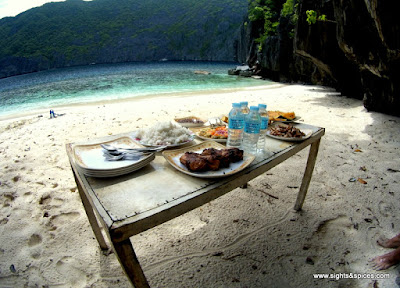 I was saddened when our guide told us that we had to leave the island, we spent a good number of hours on it. He told us that if we don't leave at that moment, we might not be able to visit the other islands anymore. Thus we a heavy heart, I bid farewell to our little paradise.


We made a quick pass by Helicopter Island, its basically an island with limestone cliffs shaped like a helicopter.


The sun was starting to call it a day when we reached Star Beach. But this didn't stop us to check the place out even for a couple of minutes. Powdery white sands grazed our feet, crystal clear waters touched our skins  and colorful corals greeted us under water. 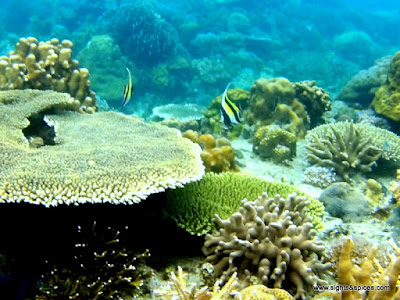 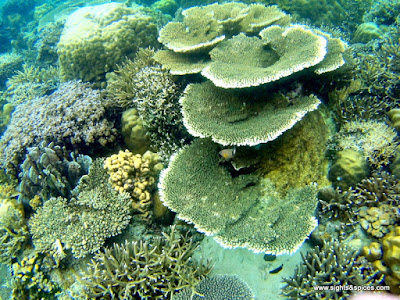 The sun started to set when we got back to Corong Corong. Not satisfied with our point of view at the Beach Shack, we  went on a short trek around the island to find a better spot to watch the sunset. It was our last sunset on the island.Aas we sat on the rocks, I was contemplating about our whole El Nido experience. Having been to different beaches in Asia and locally, this is so far the most memorable. El Nido left me feeling at awe on how amazingly beautiful nature can be. 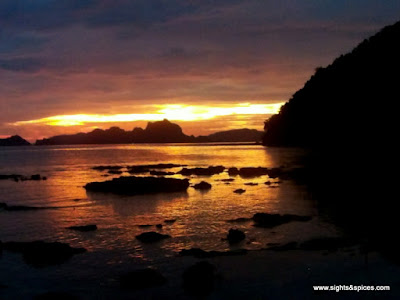 Located in one of the quieter streets in Legaspi Village, The Wine Club is one of the most underrated restos that you can find in Makati. The place looks nice and quaint, wine shelves fill the whole area and upon looking around, they carry mostly new world wines. You wont feel lost as the knowledgeable owner or server would give their recommendations on what type of wine you would want to have. 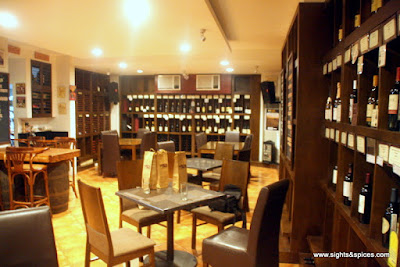 I've dine here a couple of times and here are some of the food staples that we order. Depending on what's available, ordering The Cheese and Charcuterie Board is a surprise. From the times we I ate here, we never had a bad experience with the freshness of the cheese and cold cuts. I liked how they place a small bowl of honey for the cheese. For the quality of the ingredients, this was such a steal. 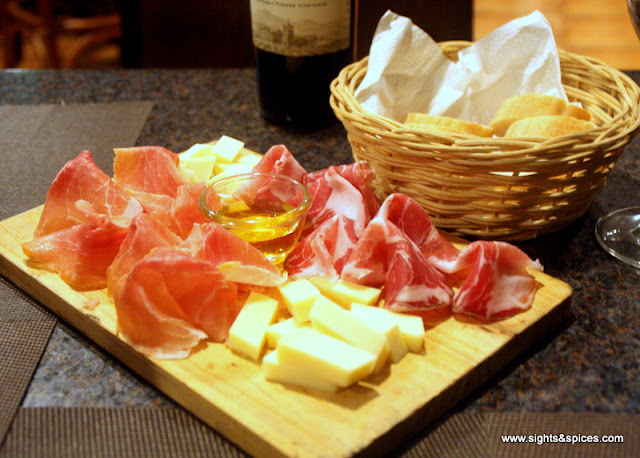 The resto offers different kind and types of premium beef. Beef from Australia, USDA beef and even Wagyu. I've tried their USDA and Australian Ribeye and all I can say is they know how to cook beef. On both occasions I got what I wanted, steak with a pinkish juicy center, cooked to medium rare perfection. 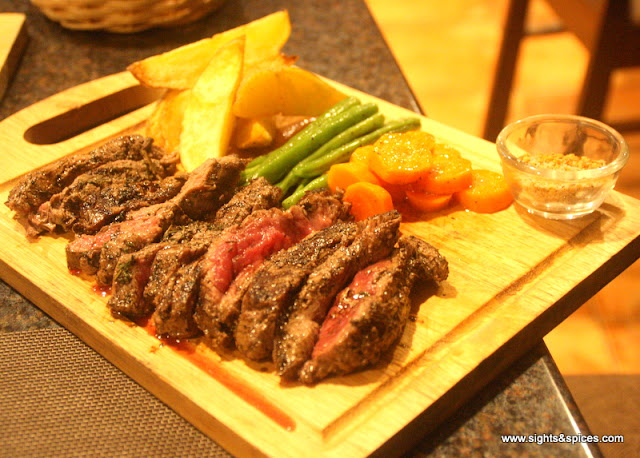 The resto also serves some pasta dishes and one dish that we tried is their House Made Italian Sausage, Fussili, Oregano and Tomatoes. We were pretty surprised how good it was, very basic, well made and tasty. 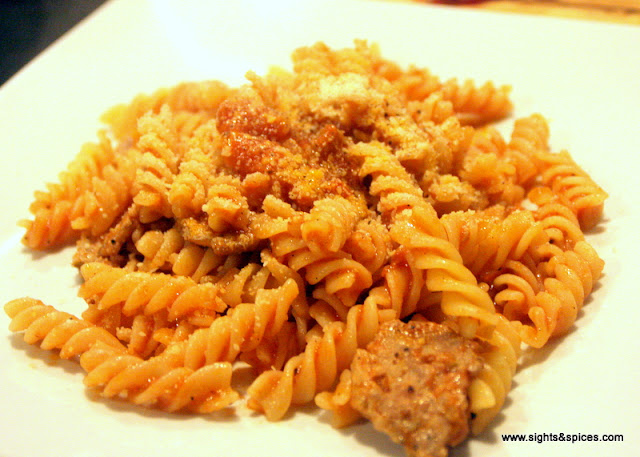 The Wine Club is a simple homey no-frills restaurant that serves good simple food. I'd preferably have a quiet dinner here rather than dining at one of the noisy restos across the block. 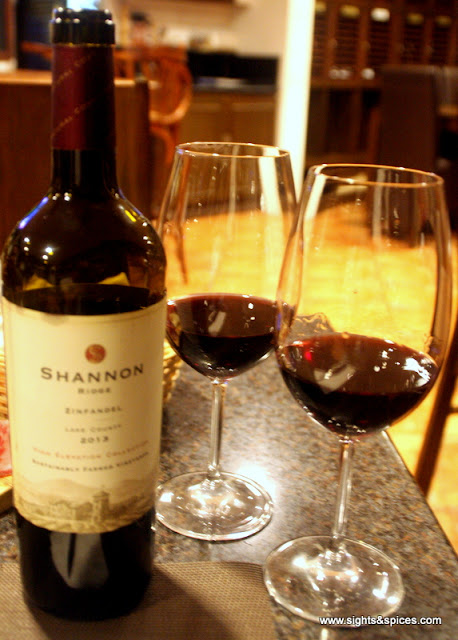