"This is my house, I AM THE BOSS!" These were the welcoming words of one of the coolest and most hospitable hostess I've ever met. We were gather around a big table as glasses of Dalandan (Philippines Citrus Fruit) Juice with Moscovado Sugar ice cubes were passed around.


The hostess continued.."We prepared the food the way I and Claude like them to be....take the first bite for us and after that you can do whatever you like with the food...If you have any complaints, the doors are always open for you to leave..". The crowd chuckled as Mary Ann continued to tell funny and insightful stories about dining in Bale Dutung.

Bale Dutung which means House of Wood is owned by the power couple Claude and Mary Ann Tayag. They converted the huge space below the house into a dining area. The set-up was Claude takes care of the food while Mary Ann entertains the guests.

The most famous guest Bale Dutung  had was someone who I admire and envy most. I think he has the coolest job in the world and I aspire to taste as much as he already has and is still currently continuing to do so. Even before Anthony Bourdain, I already heard people raving about this place. Since they only accept reservations for a minimum of 12 people, it was hard to come by. But last February, they opened their doors with no minimum number of people needed.

The house itself was worth visiting. It was huge and beautiful, it was like an artwork by itself. Designed and built by Claude, you can see his love for wood and nature. If there's one word to describe Claude, it is 'artist'. He's a painter, writer, sculptor, architect and a foodie who whips up an exquisitely great meal.

A pond with colorful carps swimming.


Most of the furnitures and decors found inside are made by Claude himself.


A Tikbalang (A Philippine Mythical Creature) plays the flute in the garden. This was my favorite art piece in the house.

A Long wooden table with bench 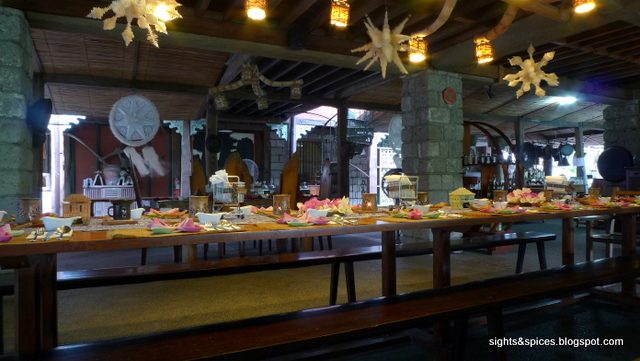 A Chandelier made from recycled materials 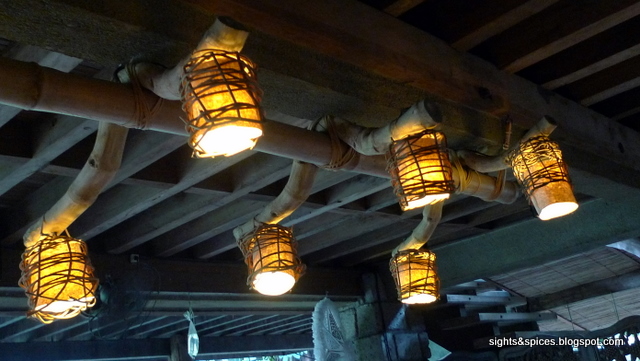 Of course an artist would have his own workshop. 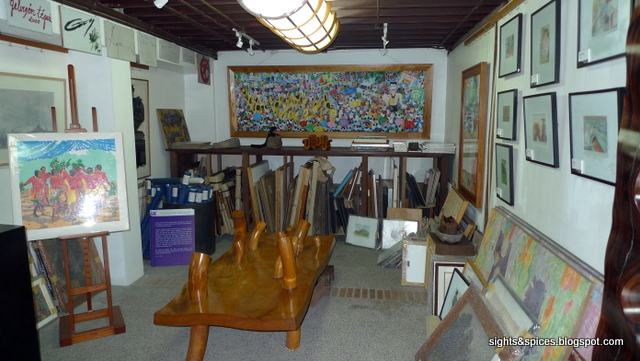 As we settled down in our seats, I noticed how simple and classy the table setting was.

I also noticed there were plastic ice bags hanging around the whole area. It was supposed to keep flying insects away from the dining area. When we asked Mary Ann if it works, her reply was: "well, do you see any flying insects around?" There was virtually no flying insects. What it does is the water inside the plastic bags reflects the light out blinding the pests who wants to enter the perimeter.

Mary Ann proceeded to explain on what we were about to have for lunch. The menu for that day was Bale Dutung's Five-Ways Lechon (Rosted Pig). For every dish that came out, Mary Ann would describe what was served and she would usually add a funny anecdote about past diners and experiences. Luckily for me, I was with a vegetarian friend who Claude cooked up a special menu, I also got to partake on what she had.

The meal started with an appetizer of crackers and different dips. Taba ng Talangka (Crab Fat), Pesto and Burong Hipon (Fermented Shrimp Rice). All of which are made by Claude that they also sell in bottle containers. Mary Ann suggested to try each dip/pate first then we can mix and match each dip with one another.


The favorite among the crowd was the Taba ng Talangka. The Pesto was made using Pili nuts instead of Pine nuts, putting a twist on the classic pesto concoction. Mary Ann explained that Pili nuts are very oily in nature thus it made a good substitute for pine nuts. Moreover, she proudly said that we should use local produce to make or cook food. The Burong Hipon was an acquired taste, Claude's version didn't have any funky smell like the one's I've tried before.

One combination that I tried and really liked was the Taba ng Talangka with Pesto.

After eating all the dips, my palate was sated with all the rich flavors that came from the Pesto and Taba ng Talangka. But then the 'Magic Potion' came, it was an Ice cold Ginger Lemon-Grass Juice. I called it such because, with every sip of this refreshing cleansing drink, it cleanses the palate preparing it for another round of flavors.


The Pako Salad (Fern Salad) was the best and freshest I had. It looked so plump and green, tossed together with sweet onions, strips of veggies and quail eggs with a zesty mango vinaigrette.

After eating something fresh, the Fried Lumpiang Ubod (Fried Bamboo-Shoot Wrap) was the right dish that followed. It was served and supposed to be eaten with a lettuce leaf. It was crunchy, simple and tasted 'clean'. For an added kick, Claude's XO Chili  Sauce was the perfect companion. 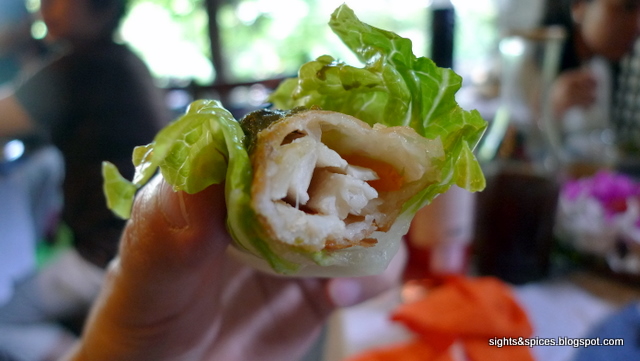 
For my vegetarian friend, she was served Inasal na Tofu. The dish was incredibly fantastic, I never seen Tofu being grilled before. Though the texture wasn't the same as the chicken wings, the flavors were very similar.

Filipinos usually eats their grilled meats with vinegar. In Bale Dutung, we were served with not just the store bought ordinary vinegar. Mary Ann told us that the home-made vinegar was aged, it was a mixture of a batch from 1999 and a batch that was made a year before. The vinegar tasted pleasantly sour with a tinge of sweetness, having aged for that long, the acidic taste was barely noticeable.

Some people cant get enough of the Taba ng Talangka, the next dish would satisfy that craving. Taba ng Talangka and Hito(Catfish) Balo- balo Sushi was up next. Japanese dishes that Claude made Filipino.


The Hito and Burong Hipon was wrapped in a lettuce.


After all the appetizers and starters, it was time for the main event...Lechon (Rosted Pig) Five-Ways!!!


First way, Crispy Lechon Skin with Liver Sauce. Set your glutton-guilt aside, the skin is the best part of a lechon.

Claude personally was cutting the skin off for his guests to munch on.


For my vegetarian friend she was served Crispy Sweet Potato and Cassava Chips.

Second way, Fried Lechon Flakes Tortilla. This is one of the three stations that was set up. You have to wait in line as the server gets a piece of tortilla, puts crunchy lechon flakes, adds the homemade kimchi with apples, sweet onions and pepper strips then it was topped with cilantro and Claude's Oriental Sauce.

I was wondering how the tortilla wrap would taste like, the combination of the ingredients seems to be weird with the addition of the homemade kimchi with apples. But as I took my first bite, a harmony of flavors greeted my palete. It was divine, every flavor and texture complimented each other. No wonder this was the crowd favorite, I ate two wraps and wanted more.


Third way, Inihaw na Tadyang na Lechon (Roasted Pig Ribs) with Ensaladang Talong. When we arrived I saw the ribs atop the hot grill. What made this dish so special was the ribs was deep fried beforehand before being roasted.


It instilled a smoky flavor on the crunchy surface of the tender fall-off the bones piece of rib. Now that's what i call, taking barbecue to another level.

This Kare-Kare (Peanut Stew) was part of another menu but it was served for my vegetarian friend. The dish looked beautiful and it even tasted more beautiful. This was the best Kare-Kare dish I tasted even without any meat in it. The sauce was divine, I found myself spooning every inch of the claypot to get hold of the rich and succulent sauce.


Fourth way, the Sinigang na Lechon (Rosted Pig Meat in Sour Broth Soup) was set up in another station. The broth was thick and tasty. Some people would have wanted the soup more sour but all of our palete preference differ from one another. Since the pork meat was from the same lechon where we got our skin from, the meat has that melt in your mouth feel.


The fifth final way and the last station. The Sisig ng Ulo ng Lechon (Chopped Pig's Head). The most famous dish that Pampanga is known for. This is also the dish that Anthony Bourdain suggested to be the Philippine's National Dish.

The dessert sounded mysterious, it was called Paradiso (Paradise). What came out was three small spherical desserts in carabao's milk. It was Yema (Custard), Macapuno (Sweetened Coconut Flesh) and Ube (Sweet Yam).

Previously known as Tres Bolas(Trio of Balls), Ms. Doreen Fernandez, a well-known local culinary icon took a bite of this dessert and exclaimed.."this is Paradise!!!". I definitely agree with her, the balls were lusciously sweet. The medley between the balls and the Carabao's milk was excellent. The richness and thickness of the milk made the dessert exquisite.


After Lunch, we were privilege to be allowed to enter the living area of the Tayag's upstairs. Again, everything was made of wood. Everyone noticed how the floors were so shiny, the caretaker proceeded to tell us that Claude used recycled wooden floors from bowling alleys.

This is Claude's Lab, no one is allowed to cook here but him. 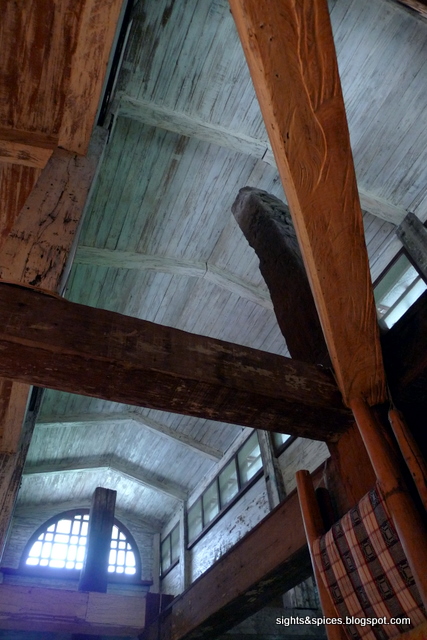 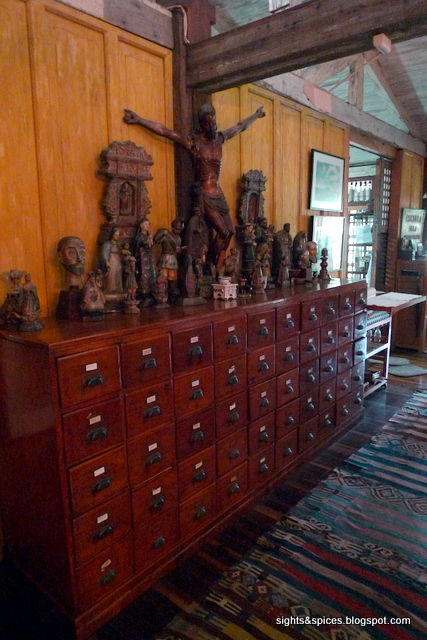 Another Masterpiece made by Claude.

A beautiful balcony to lounge around 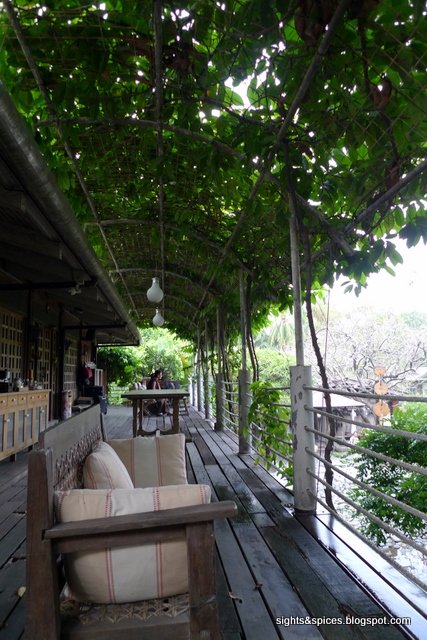 After everything, I sat on a bench in the balcony of the house, I was admiring the scenery and was taking in the cool breeze. I remember Mary Ann saying that it was going to be a long lunch. To me it was no ordinary long lunch, it was an awesome experience that I'll always remember for the rest of my life. 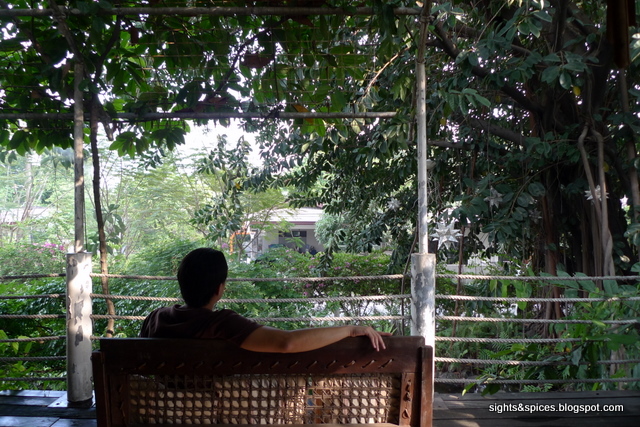 I sent an email to them thanking them for a wonderful lunch...

> To Claude and Mary Ann,
>
> Claude the food you prepared were absolutely fantastic! I usually say
> I don't get excited anymore when I eat Filipino or Chinese dishes.
> Since I grew up eating the same dishes over and over again, It was
> just a matter of Filipino food being cooked well or not. But last
> Sunday, the dishes you concoct and prepared blew me away. You took
> Kapampangan/Filipino cuisine to the next level. Sad for me though next
> time I go eat at another Filipino resto... when you tasted the best
> everything would taste satisfactory na lang. Thanks for exciting my
> tastebuds and welcoming us to your beautiful awesome home. Thanks!
>
> Mary Ann you are the best 'kick-ass and coolest' host I have met.
> Claude prepared the dishes to perfection but it was you who completed
> the whole dining experience. Thank you for welcoming us with open
> arms. I felt so welcomed and at ease with you around. And I'll always
> remember who's the boss at your place...YOU...hahaha Again I can't
> thank you enough for making last sunday's lunch an unforgettable one.

To my surprise Mary Ann replied....

>hi jay,
>your email made me laugh. i just got back from l.a yesterday and nice to be welcomed with such messages. >and i read it loud to claude and even forwarding it to him now so he also get to know who is the boss. haha
>best regards
>mq