Sights: The Old The New And The Heart of MALAYSIA

Whenever I hear something about Malaysia, I would always remember their tourism slogan...'Malaysia, Truly Asia'.  People I know would hop on a bus from Singapore and  would just spend a day  in this multi-ethnic and multi-cultural nation. Fortunately, we got three whole days to go around around the old, the new and the heart of Malaysia to find out what 'Truly Asia' meant.


As soon as we landed and checked in our hotel, we went to the Bukit Bintang area. We were greeted with crowds of different ethnicity. There was an on going concert of some sort in the middle of the street,  I am sort of a claustrophobic but the atmosphere was so festive that I didn't mind being around the crowd.

Everything was so alive. The different shops, massage parlors, restaurants and interesting people lined up the street. There were B-boys who were taking turns strutting and showcasing their moves, a blue colored man who would move when you drop a coin in his box and a man with a Huge python around his neck that you can pet and take your picture with.

The next morning, we made our way to Bandar Tasik Bus Terminal to start our adventure to 'The Old Malaysia', Melaka. Melaka or also known as Malacca was ruled by the Portuguese, Dutch and British. From the terminal it took around two hours to get to the Melaka Terminal then we boarded another bus to get us to the Old Sights.


The Bandar Tasik Selatan Bus Terminal was really nice and clean. We checked the time and  bought tickets at the Universal Ticket Counter near the entrance. Then the lady asked us to proceed and wait at the boarding gates. It felt like we were in an airport.


The two hour bus trip was a smooth and comfortable ride. i wished our buses back here are like these. Just look how much leg room I got!


We got down at the Stadthuys and was greeted by colorful Trishaws. You can rent the Trishaw to take you around Melaka but we decided to walk it out. Rental of Trishaw would cost around RM 20 for 1/2 hours. (around Php300)


There were two areas to check out, the Melaka City Heritage Trail and the Dutch Heritage Trail. We started with the latter trail and here are some of the places that we checked out.

The Ruins of St. Paul Church, it was built on 1521 by a Portuguese nobleman to say thank you for his escaped from a storm in South China Sea. There were huge old Portuguese tombstones that were all around the church's walls.

Nearby was the Dutch Graveyard. Before there used to be a lot more but when we went there only five remained.


Seri Melaka or the Governor's Museum was the former official office and home of the Dutch Governors before.

Inside you can find different rooms with original furniture that dates back from the past. There were also different collections of stuffs and memorabilias.


The Democratic Government Museum tells the story of the development of the parliamentary democratic government of Malaysia.


Along the river, there was a beautiful  wooden wheel that was labeled Kincir Air Kesultanan Melayu Melaka. I'm not really sure what this symbolizes or what it is for but it was a pretty wooden structure.

Among all the museum that we went to in Melaka, our favorite was the Maritime Museum. The Museum itself was a replica of the Flora de La Mar, a Portuguese ship that sank off the coasts of Melaka. There was an entrance fee of RM 3 for adults. (around Php 45)


People can actually go aboard the huge replica and look at different model ships and different artifacts inside.


There were still a lot of museums that can be visited but we were so tired and decided to just take a leisurely stroll in Jonker Walk.

Jonker Walk  is filled with different antique stores, art galleries,  souvenir shops, restaurants and food stalls. The place felt like travelling to the past because of the old architecture and buildings.


The next day before heading to 'The New Malaysia', we passed by the famous cave Temple, the Batu Caves. The place of worship is famous for the Thaipusam festival. Thousands of Hindus flock to celebrate the occasion. It is also popular to see devotees pierced their body parts with huge spears. The spears would support decorated canopies, the devotees would then climb up 272 steps of stairs. 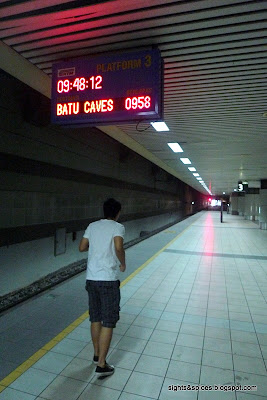 Long Tailed Macaques greets guests when climbing up the stairs. Be a little careful of the monkeys, they can and will snatch stuffs from you.


Inside the cave, there were different stations with Hindu Deities

The view inside the cave was truly amazing. We had a blast looking at the rock and limestone formations inside. 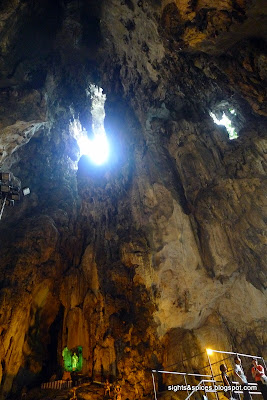 We were surprised to see monkeys going up to the top, using the rocks to step on while holding on to the tress branches pulling themselves up.


There were also a lot of pigeons at the mouth of the entrance. Feeling like kids again, Jim and Jon had fun feeding and chasing them around.

We rode the KL express and made our way to see 'The New Malaysia' which is Putrajaya. Putrajaya is also called the garden city, it houses the different government offices as well as the country's modern commercial and financial centers. Everything was so modern and the architectural designs of the buildings were grand and stunning.

Travel Tip: I would suggest people to join the free tour around Putrajaya. From what I remember there are two schedule trips daily. If you are not planning to join the tour, rent a taxi instead and tell the driver to take you around the city. (Sadly we failed to do this..)


We rode a bus from the Putrajaya Terminal and as soon as we saw a beautiful pink mosque, we went down and walked towards it. The Putra Mosque is the main mosque in Putrajaya, we wanted to go in but unfortunately there was an on going worship service during that time. 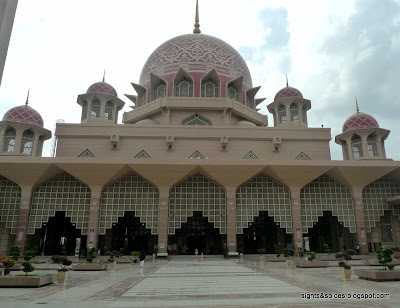 Nearby was the Perdana Putra, it is the huge office complex of the Prime Minister of Malaysia. 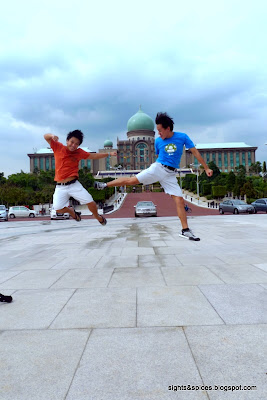 We also viewed the magnificent Seri Wawasan Bridge from this area.


After going to Putrajaya, we headed back to Kuala Lumpur, the country's capital and started our expedition in 'The Heart of Malaysia'. Our first stop was Jalan Petaling, Malysia's chinatown. There were rows and rows of shops that sells all the things that one can think of. From clothes, souvenirs, electronic items, bags and many more.

I mentioned before that we were not that into shopping much but here are a few things we bought at Petaling Street...Collared Shirts and Eye Masks.


Travel Tip: Don't get mistaken with Sri Petaling train stop and Jalan Petaling. These are two different areas. Jelan Petaling  can be reached by getting off at Pasar Seri station. (We made the big mistake of going all the way to Sri Petaling!)

The next morning we continued our expedition and headed to Menara Kuala Lumpur. Malaysia's telecommunications tower which has an observation deck on top.Entrance Fee per person costs RM 45. (around Php 675) 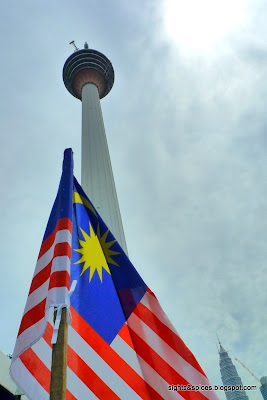 We purchased tickets that would bring us up the observation deck. The ticket included a F1 simulation drive. While waiting for the elevator at the lobby, the glass crystal dome was magnificently sparkling.


At the entrance of the observation deck, all guests were given a small video player and headsets. There were numbered areas around, guests can start with area 1 and sync their video players.  The video presentation would tell guests about what area they are staring at from the deck.

One of the favorite buildings people were looking at was the Petronas Towers.

There were binoculars around to take a closer look at the buildings.

Hmmm..I wonder what are they looking at.... 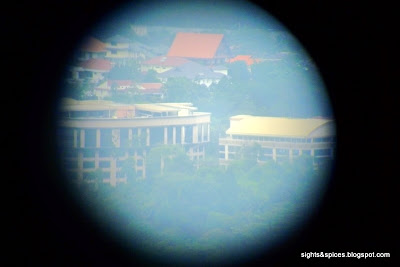 We headed towards the F1 simulation driving area to drive and play. There were mock up models of  F1 racing cars, to our surprise the car models were made by a Filipino.


The last and the most important place to visit in Kuala Lumpur is the Petronas Twin Towers. As of this moment, the structure is the 5th tallest building and the tallest twin tower building in the world. We were awe struck when we saw the huge towers, not only was it tall, it was also so beautiful. The shape of the towers is based on Islamic arts which is a representation of Malaysia's Muslim religion.


I strongly advice people to so see the towers twice. With daylight and at night time, the towers looks totally different. In front of the towers there also was a fountain area.


Did you know that in order to finish the construction faster, there were two main contractors that were hired to build each side of the Petronas Twin Towers. The contractor who gets to finish his side first gets an extra bonus. The build started in 1992 and was done by 1998.

We went inside the building to see if we can go up the Skybridge but unfortunately it was closed for rennovation. We headed to KCC Suria Mall  instead to eat and look around a bit. When we saw that it was already dark outside, we made our way to the exit to view the towers at night time. All three of us had goosebumps, the towers was glowing and sparkling before our eyes. It was absolutely beautiful!! 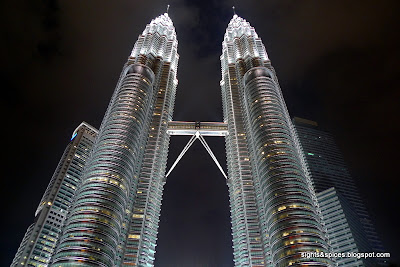 Malaysia was indeed 'truly Asia', what made it this way was the peaceful and loving people who lives in the country.  I saw how the people with different races and culture are peacefully co-habitating and living with one another.  Case in point, we stayed at Malaysia's little India area, there was a huge Islamic Mosque and whenever the speaker sounds off that its prayer time, the non-muslims would keep stiil and quiet while the Muslims were praying. In Malaysia, there are no cultural boundaries, they were not separated by language, ethnicity, culture or religion because they seem to be proud of being Malaysian first before anything else.