Spices: Dining At The Fresnels

One of my ultimate dreams when I go travelling abroad is to get invited by a local to their home for a good old traditional home cooked meal. Little did I know that my dream would happen happen right here, it would take place in the lovely home of Jean-Louis and Eve Fresnel. I first met Jean-Louis at Cafe de Paris, his restaurant that has closed. In spite of this very sad circumstance, we have kept in touch and dined out regularly. He has now ventured into importing 'luxurious' food from all around Europe. One of our favorite topics of conversation is about food and he always promised that he would one day invite us over at their place and whip up an authentic home cooked French meal. 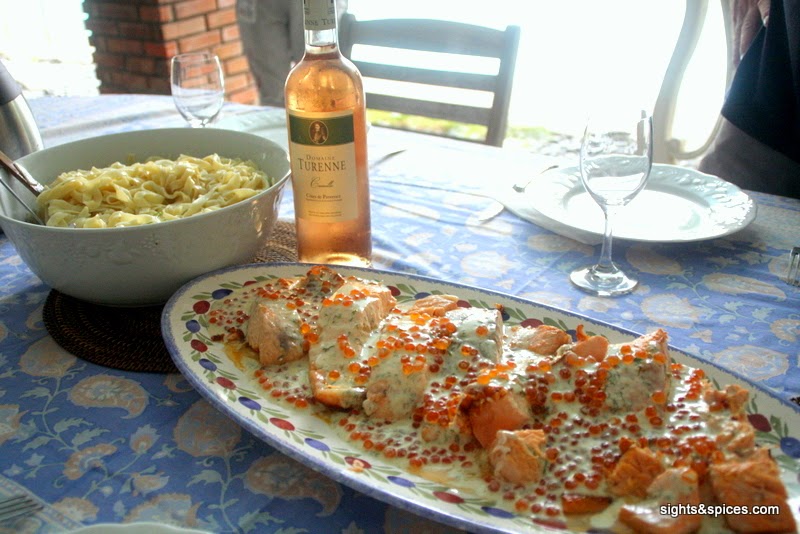 One of my strong suits is my sense of smell, I tend to notice and remember a specific smell of a certain place. I've been to different kitchens of restaurants and homes, when I got whiff of what's cooking in the Fresnel's kitchen, it was my first time to encounter that kind of smell. It had an aroma of herbs, cheese and bread which was totally different from the smell of condiments and ginisang bawang at sibuyas in local homes.

On both occasions that we've been there,  we got to try countless numbers of starters and appetizers. Most of the food items were part of what Jean-Louis brings in thru www.bowtieduck.com.

Delicious fatty bite-sizes pieces of Sausages, Jean-Louis would usually carry a whole pack of these around even when we dine out.


Jambon or dried ham, it's like the Spanish Jamon Serrrano and Jamon Iberrico. I've tasted both Iberico and Serrano hams before, these melt in you mouth treats were less salty and had more of the smokey flavor.

Sologne Caviar. If I remember it right these type of fish eggs comes from the sturgeon fish, briny and taste of the sea. It was perfect with a glass of fruity Sauv Blanc.

Tasty Blood Sausages were served with crostini. The sausages had a rich mineraly flavor.


I've eaten black truffles before but I haven't seen the whole thing until that night.


Jean-Louis made some creamy scrambled eggs on toast and put chopped black truffles on top.


A French meal would always have cheese on the table. We got to try some French Blue Cheese, the cheese was so easy to eat, it had the right balance of sweetness and saltiness. Plus, it wasn't too strong and tarty compared to the locally known Roquefort french brand.


We ate the cheese with some lightly dressed lettuce and baguette.


For our entrees, the first time around Jean-Louis cooked some Pasta with Salmon in Cream Sauce topped with Salmon Roe. As Eve would say, Jean-Louis doesn't like people hanging around the kitchen while he is cooking. But he was kind enough to allow me to watch and ask him as he prepared and cooked the main dishes.


The pasta dish was divine! The dill complimented the salmon and cream sauce really well. The salmon roe was perfect to complete the perfect bite. I felt that Jean-Louis intentionally under seasoned the cream sauce to accommodate the briny flavor of the salmon roe. The French rose wine he picked paired excellently with the dish as it was dry and it had hints of citrus. I couldn't get enough of this, luckily for me there was enough to have a second helping.


The next main was a dish that Eve mentioned in one of our dinners, it's one of the French dishes that she misses, The Tartiflette. The baked dish consists of stir fried chopped potatoes and onions topped with Reblochon cheese. The one we ate had smoked salmon and Jean-Louis said that another variety would have bacon in it.


The Reblochon is a semi soft cheese that's denser than a Brie and is tastier and richer in flavor. It's the only type of cheese that the French use in making Tartiflette.

The potato dish was wonderfully rich, heavy and cheesy. As we were enjoying spoonfulls , they would share stories about the Tartiflette. It turns out that this dish is usually eaten during the cold winter months in France. Eve would recall that she and her whole family would stay in front of their fireplace eating Tartiflette every Christmas mornings.


The desserts were also such a treat, I enjoyed the Fruit Creme Brulee and the Apple Mousse. It was a refreshing fruity way of ending the meals, just the way I liked it.

Of course a French meal wouldn't be complete without wines, we had countless number of good wines on both occasions (I lost count on how many bottles we consumed). The memorable ones are the vintage 90's French yellow wine (forgot to take a picture of it) and the French chocolate dessert wine.

It was such an unforgettable experience. From the bottom of my heart, I would like to thank Jean-Louis and Eve for making one of my dreams come true. I've eaten at top restaurants this year but the meals at the Fresnels top my list. It wasn't just great tasting food, it was also filled with great company and awesome conversation. Jean-Louis and Eve, Thank You Very Much and see you soon!


Afternote: Eve is currently teaching French in an International school and she also does private tutoring. If you want to learn French, you can contact me and I'll forward her email to you.