I came upon Silantro in I am a Dekaphobic's site. Having a fondness for Mexican cuisine, I visited the place and tried the food out. As it turned out, the resto serves a fusion of Pinoy and Mexican cuisine.


We wanted tho try the Dinamita but it wasn't avaialble so we ended up ordering the Papi's Frita and Nachos.
The Papi's Frita is thick cut french fries with a generous amount tomatoes and melted cheese. I really enjoyed the fries, even with the tomatoes and cheese on top, the fries were still crunchy.


Just like the fries, the Nachos also has tomatoes and cheese on top. One has a choice of meat you can put on your Nachos. I picked chicken and ask them to serve it on the side. The Nachos were delicious and what made this dish standout was the super flavorful chicken.


The bestseller of the resto is their Lucha Tacos. Depending on what meat is available, you can pick from a single, double or triple choice (Ligero, Medio and Completo) of meat in your taco. The meat choices are pork, chicken, beef, ox tail, lamb and lengua. You can also pick from having a hard or soft shell taco.


I went for the Medio soft shell taco with Lengua and Beef. The meat was topped with chopped tomatoes, lettuce and cilantro. It was served with guacamole salsa. The Taco might look simple but it packs so much flavor, it tasted so fresh and savory.  The combination of the fresh veggies, guacamole salsa and marinated meat was spot on. I love the marinated meat, it tasted of sweet paprika. I just hoped that they heat up the meat before serving. One notable thing to ask for is their hot sauce, they don't serve your ordinary bottled hot sauce but rather they'll serve you a small cup spicy guacamole salsa.

I got to try one of their main course, the Grilled Mahi Mahi. The lightly seasoned grilled fish was served with the guacamole salsa and a cup of rice with ears of corn.

The fish was moist, flaky and it was seasoned enough to bring out the flavor of the fish. 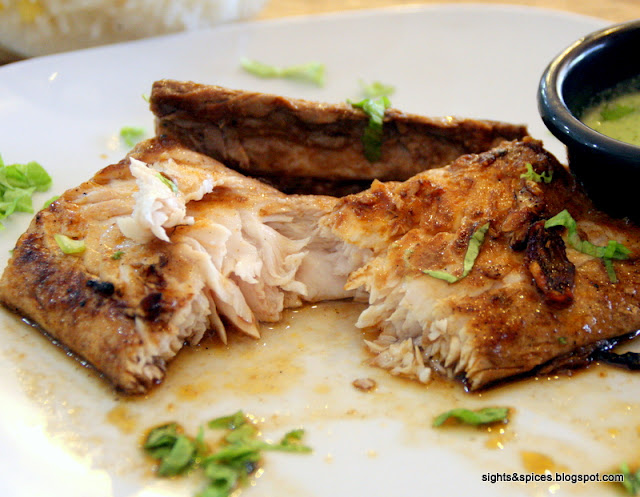 Aside from beer, Silantro also serves two cocktails, the Margarita and Mojito. The resto boasts of their Mojito and one can choose to go for unlimited refills. The Mojito was quite good but I felt that they have to be consistent in concocting their cocktails, there were times that I felt that the Mojito tasted too much of alcohol.

I enjoyed dining here in Silantro. This small resto serves simple and tasty food. Prices are relatively cheap and  yet the food was of good quality. A resto that's worth visiting again. 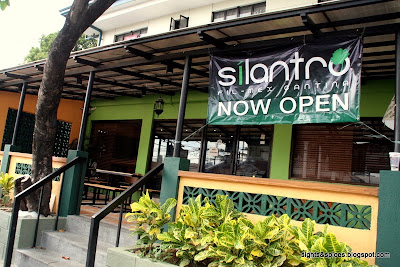