Sights: The Laid Back Feel of BANTAYAN ISLAND, CEBU

Whenever I hear people tell stories about Bantayan Island, they would always say that the island is the perfect place to beach bum. I recently got the chance to find out if what people have said was true. The island is located at the northern end of Cebu. One has to ride every possible means of transportation to get there, from the air, land and sea.


The journey getting to the island starts with a plane ride to Mactan International Airport. From the airport, we hailed a cab to bring us to North Bus Terminal for a 3 hour bus ride to Hagnaya Port. We then rode a ferry to bring us to Bantayan.

The ferry docked at the municipality of Sante Fe, the same place where the beach resorts are found. As soon as we checked in in one of the resort, we made our way to the beach. The vast white sand shore and clear waters looked so calming and all we wanted to do was stare in silence.


The sun was still glaring so we decided to go around the area. Seeing vehicles with four wheels is a rarity here, motorcyles, bicycles and pedicabs are the main way of transportation. There are numerous places where one can rent motorcycles and bikes, so take your pick. You can choose to rent it on a per hour or per day basis.

Going around was easy since the roads were smooth and well paved. There were trees all over and in some areas, they would even serve as shade from the glaring sun rays. The roads were quiet and peaceful, the breeze felt so fresh and it was so nice biking around.

After biking around, we went back to the resort and decided to take a dip. The shore was clean, the sand was fine enough to go barefoot and most importantly the water was clear and refreshing. One thing that I found kind of a mood buster is that you can see the docking port and ferries from the beach.


The next day we decided to go island hopping and snorkeling. We rented a whole bangka from one of the local bike peddlers we met during lunch in the market area the previous day. He picked us up at the resort and went straight to the public market to buy food to be cooked on the island.

Since Santa Fe is a fishing village, the different kinds of fish was so cheap, a kilo of fish would cost less than a hundred and some would go as cheap as 40php to 50php a kilo.

After buying the necessary stuff for lunch, we boarded the bangka and made our way to Virgin Island. The boat ride took around 20 minutes. As we got near the island, one thing was evident, the sand looked finer and whiter plus the waters looked clearer.


There was an entrance fee of 500php good for five people. Cottages were also available for rent for a hundred. The island looks beautiful, palm tress surround the whole area and there was even a smooth patch of grass at the center. We were told that a resort was in the process of being built in the island, we were lucky that we got to visit the island before the resort is built.

The local and boatman  got the food we bought from the market and proceeded to prepare our lunch while we got our snorkels and went straight for a swim. As soon as we step on the water, there were already little fish swimming around. Beautiful colorful varieties of fish greeted us as we snorkeled around the area, there were a good number of them. We had such a blast. 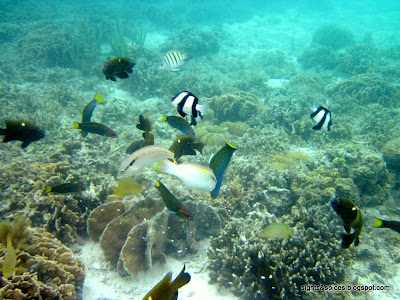 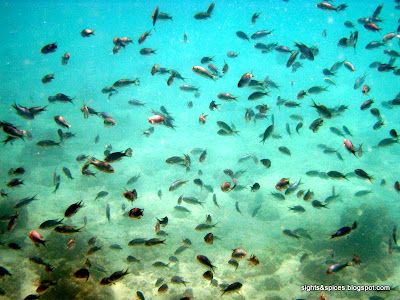 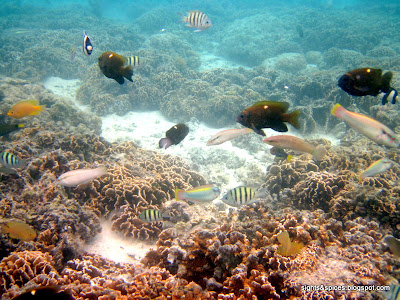 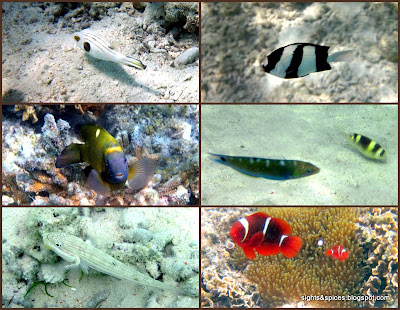 After an hour or two, the boatman called our attention, the food was already cooked and ready to be feast on. As what they suggested, they've prepared grilled fish, grilled eggplant, tinolang isda (fish soup cooked with ginger) and a huge platter of rice was place on one of the cottages we rented. It looks simple but everything tasted so sweet and fresh.


We had so much fun at Virgin Island, we could have stayed for a whole day but before the sun sets we had to go back to Santa Fe. I hope in the future, the island will still remain as beautiful and still be filled with so much marine life even when the resort is built.


Before leaving, we decided to visit the said first and oldest church established in Cebu, The Parish Church of Saint Peter and Paul or more familiarly known as Bantayan Church. The church is located in the town proper and luckily the resort's van let us hitched a ride to go there. It was relatively a short 15 minute ride to go there.

As I've mentioned before, Bantayan is a fishing island. Aside from the fresh fish in the market, we also came across a plastic bag of freshly cooked Scallops and a 'just caught' Clam.  The sweet tasting scallops were sold around the docking area, each plastic bag has around 12 to 15 pieces of scallops and it only cost Php15 (this is not a typo, it was really that cheap!!!)


Around the shore area we were approach by a local who was carrying a pail, she asked us if we wanted to try a clam that her son just caught.

When we agreed at a Php60 for a clam, she proceeded to prepare it Ceviche style. She chopped the clam, onions and tomatoes, place it back on its shell and poured vinegar on it. It tasted so fresh and delicious.

What I heard people say about Bantayan Island was so true, it was indeed a perfect place to beach bum. I was pleasantly surprise how quiet and peaceful the island is. It has an indescribable calming effect on me, all i wanted to do was take in the breeze, gorge on fantastic fresh seafood, take a dip in the clear blue waters and keep my feet prop up as I stare out into to the open. Bantayan's laid back feel makes it the perfect place to forget about everything, do nothing and relax.