With just a night to spend in Cebu city, we made sure to drop by Zubuchon. The restaurant which was declared by Anthony Bourdain to serve the best pig ever. Having seen pictures, reading articles and watching features on Zubuchon, I have nothing but high expectations, I was so excited to try it out and find out if it was indeed the best pig ever. 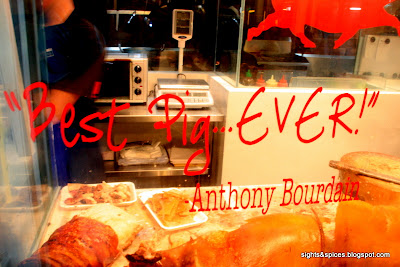 We got to Zubuchon around an hour before closing time, the place was still packed with diners. When we entered, the whole roasted pig on the center caught my attention. Since the crunchy skin is the best part of a roast pig, I found the roast pig unappetizing. Rather than having a shiny golden hue skin color, it's color was more on the pale yellowish shade.


The skin's color didn't dampen my excitement and expectations. I thought the reason for the skin's pale yellowish color was they still heat up a serving of the roast pig in the oven upon ordering. When the server placed my lechon meal, the skin still look the same. It was far off from what I've seen and what I've heard, the skin I've seen was golden brown and it had the bubbly crackling texture, this was totally not.

I would have wanted the lechon meal to be heated, it was kind of cold that I can feel the sebo on my mouth as I took a bite off the skin. The skin was crunchy but it wasn't the 'candy' crunch that I was looking for, it had more like a 'tough' crunch. The meat was tender but again the sebo feeling was overwhelming.

There was one dish that we thoroughly enjoyed, the dish was relatively new and it wasn't even printed on the menu yet. On the table, there was a small poster of the Crab Relleno with the caption 'Pure crab meat, no extenders..'.


The dish delivers what it promised, shreds of pure crab meat placed inside a crab shell then dusted with breadcrumbs and fried.

It was perfectly cooked and adding a little squeeze of lemon brought out the sweetness of the crab. This is a must order! I definitely enjoyed eating this more than the restaurant's specialty lechon.

I'm not sure how Zubuchon's roast pig would taste like if it was served hotter, I wished I asked them to heat the lechon during that time but then again they should know to always serve lechon pipping hot . Maybe I ate there at the wrong time and I went there on a bad day. I hate to play bad cop but I was so disappointed with the lechon, I would have to eat and taste it again in the future and hopefully by then I would agree that it was the best pig. As of the moment,  Bali's Babi Guling reigns supreme for me.