Being a relatively new Chinese restaurant, I haven't heard anything about Phoenix Court. The one and only one thing I found out was this resto was nominated as one the best restaurants in the recent Miele Guide.

The restaurant was set up like a typical banquet hall but in here, it was huge and spacious. Tables and chairs were far apart for guests not to hit each other when one has to get up from his seat, something that commonly happens in crowded Chinese banquet halls.

I like the design of the lights at the bar.

As soon as I got to my seat, tea was poured in my cup and a complimentary small plate of boiled salted peanuts was served.


I asked the server for his reccomendations and I obliged to order the restaurant's bestsellers. I started with the Special Assorted Cold Cuts Combination. Slices of Pork Asado, Hainanese Chicken, Roast Duck, Chinese Ham, Seaweed Jelly and Century Egg makes the platter. The dish was beautifully presented, the platter was shaped like a phoenix.

The Cold Cuts platter was served with a neatly presented sauce plate. The sauce plate consisted of a Hoisin, Light Vinegar and a Chopped Ginger with Oil sauce.


Generally everything tasted nice and savory. The Pork Asado though was kind of tough, I felt that it wasn't thawed well enough before being served. I particularly like the Hainanese Chicken, it was so tender and flavorful.


Bite-size pieces of beef on top of a bed of sliced onions with green, red and yellow peppers makes up the Quick Fried Beef Tenderloin with Black Pepper dish. This dish get high marks, it was seasoned well and the beef was so tender. It wasn't too salty or spiced up, it tasted just right. I like how tender the beef was, it had sort of a gelatinous chewy texture. I also loved how the onions and pepper were lightly stir fried, I enjoyed munching on the crunchy vegetables after grabbing a piece of beef.

One of my favorite dishes in a Chinese banquet feast is the Steamed Whole White Fish with Light Soy Sauce.The Steamed Dory Fish Fillet with Soya Sauce in Phoenix Court hits the spot. The fish fillet was cooked perfectly right through, the fillet melts in your mouth. The sauce tasted exactly like how it is supposed to be, light, savory with a little astringent flavor coming from the onion leeks and wansoy.

If there is one dish that Phoenix Court can boast of, it is the Homemade Bean Curd with Crab Meat and Fish Roe. In my opinion, this will be the dish that will put Phoenix Court on a foodie's map. It is SO good, it automatically became one of my favorite tofu dishes. As I was told, the bean curd was mixed with eggs, it made the tofu yellowish and it sort of formed an outer crust on the tofu block. The sauce was thick and savory, it had huge chunks of crab meat and eggs. At the bottom was slices of Bokchoy which added the crunchy chewy texture to the dish. Usually fish roe is used for garnish but in this case it was actually part of the dish. As soon as I swallowed the soft silky tofu and the chunks of crab meat and eggs, I could feel the roe popping in my mouth. I haven't tasted anything like this and I would go back just to partake on this wonderful dish alone.

When eating Chinese food, I would usually feel satiated from all the flavors and oil that came from the dishes. Phoenix Court's Buco Pudding was the perfect ending to my meal. It tasted light, fresh and refreshing, the perfect palate cleansing dessert. Simple and Delicious!

After my meal, Chef Cheong Kwan Loong, a Malay-Chinese who heads the kitchen came out to ask me how I liked the food. I told him that Phoenix Court is definitely a Chinese Restaurant who makes and cooks great Chinese food. I also added that his creation of the Bean Curd dish and Buco Pudding dessert was unique and truly amazing. He gave me a smile and told me he was glad that I liked his food, I shook his hand and I told him it wasn't the last time he'll be seeing me. 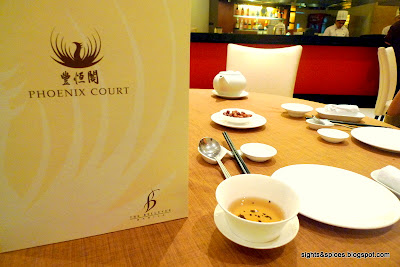