Having eaten at the previous best restaurant in 2010 (L'Atelier de Robuchon), we expected nothing but excellence from Iggy's, 2011's best restaurant. Luckily I booked a month ahead of time to make sure that we secure a table, the restaurant is relatively small and it can only sit and accommodate a few number of people at a time.

As we entered the restaurant, my first impression was everything looks so bare and simple. The walls were pitch black with a few mirrors hanged, the simple cube shape chandeliers were the only light source that lighted our path.

The dining area looks even simpler, on the table it was just the basic linens, cutlery and a fishbowl with a flower inside. But upon looking around I found a lot of cool things.

I also noticed the tag on the table linen napkin, Italian custom made for Iggy's.


Even the menu was shockingly simple, no complex french terms or cooking methods. Printed on was the main ingredient in block capital letters and below was the accompanying ingredients that goes with it. Simple. Little did I know that this was how our whole experience will turn out to be.

There were two kinds of complimentary bread served, a mini baguette and a sourdough bread. The breads were served with shaved butter.

The Amuse Bouche was a Salted Fish Mousse with Caviar and Mint Jelly. The mousse' consistency was amazing, it had a creamy melt in you mouth feel. I was baffled on how they incorporated the fresh salted fish flavor in the mousse. It was flavored and seasoned perfectly just enough to tingle our paletes. 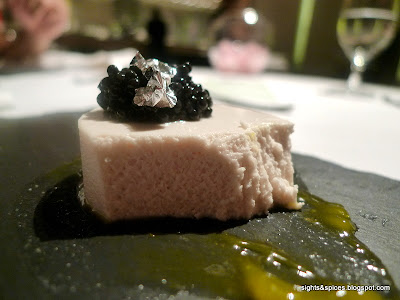 We had one of each the three different appetizers found on the menu. The Heirloom Tomatoes was nice and refreshing, the greens went so well with the sliced tomatoes.There was a sweet gelatonous puree at the bottom, I never had tomatoes as sweet as this before.

The Kanpachi's texture was heavenly, my guess was that the fish was cooked using the sous-vide method. Sous-vide is a french cooking method where they put the meat inside a vacuum packed plastic then placed in a water bath. It renders the food to be cooked evenly incorporating a 'juiciness' texture. The bits of Shio Konbu which is a type of Japanese seaweed boiled in soy sauce added the right amount of saltiness to the dish. The strips of ginger and squeeze of lime completed the fresh tasting fish dish.

Our favorite among the appetizers was the Ranched Southern Blue Fin Tuna. The raw slice of fish was topped by Nicoise Vegetables and Truffled Mayonaise.  Every component in the dish complimented each other magnificently. The crunch from the vegetables, the creaminess of the quail egg's yolk, the sweetness earthy aroma of the truffled mayonaise and the freshest tuna all together create one harmonious bite.

There were two pasta starters, the first was the Spaghettini. It has slices of Smoked Mullet Roe and slivers of Zucchini on top. The Mullet Roe is a delicacy in Taiwan which kind of resembles the shape of a cow's liver, it has a pinkish orange color. The pasta dish was really nice and simple. The smokey flavor and slight salty taste of the roe brought life to the al dente pasta.

The other pasta starter was the Farfalle or bowtie pasta in a creamy Anchovy Carbonara with Sorrel greens. Though the cream sauce has anchovies in it, it didn't taste fishy at all. It has the right amount of saltiness and the Sorrel greens added the acidic sharp taste to defuse the strong aroma and flavor of anchovies. To top it off, Truffle Oil. Yum!


The following starter might sound and look simple but this was one of my unforgettable dishes I had in my life. The Free Range Egg with Truffles and Mushroom was such a delight. The harmonious texture and flavors from all the ingredients was astounding. The creamiest egg yolk with the crunch from the mushroom strips and the juicy earthy aromatic truffles were heavenly. This was my first time to try real truffles, it was like eating black wood ear fungus or more popularly known locally as 'tenga ng daga'. I love truffle oil but the aroma and flavor coming from the real thing is more potent.

For our main course, we started off with the Threadfin Fish with Sweet Pea, Onions and Ginger below. Again my guess would be that the fish was sous-vide. From the tip of the fillet to the tail, the flesh was evenly cooked. The fish was incredibly soft and moist. At the bottom, the peas and onions was savory sweet while the ginger added that spicy zesty flavor.

The next dish was the Kurobota Pork with Romanesco, Chicpeas and Tanba Beans on a black and red sauce. Kurobota is known to be the Wagyu of Pork Meat. The pork came from the Berkshire Pig breed which originated in Berkshire, England.  But nowadays the pig breed is also being bred in Japan. The slice of pork was so fatty and tender, I'm really not a big fan of eating pork fat but tasting this was a great experience. From how it tasted, the black sauce was squid ink while the red one is pepper sauce. Both the sauces were rich and flavorful, it got rid of the greasy taste that stays in your mouth after eating pork fat.

Our favorite main course was The Lamb on a bed of Tapenade and Quinoa with Grilled Eggplant  and Cornbread with a Cherry Tomato on top. Having tasted and cooked lamb before, I know how lamb meat can be tough and it can taste gamey as well.  Jim and Jon had first bite of the pinkish rib of lamb, I literally saw them unconsciously shaking their heads from left to right. I asked them why such an expression, they both told me that the meat was unbelievably tender. When I took a bite, it was mind blowing, it was SO tender indeed and it absolutely has no gamey aftertaste. It was so good that I can claim that this might be the best piece of Lamb Chop I'll ever have.

For our dessert, the words Caramel, Strawberry and Chocolate was on the menu. The Caramel dessert consisted of a Caramel Flan, Brown Butter Ice Cream, Grapefruit, Miso and Pecan. The balance of the sweet, sour and zesty flavors of the ingredients hits the right spot.


The Strawberry dessert looked like a beautiful painting. Basil Ice Cream on top of Graham Crumbs, Slices of  Fresh Strawberries, Dots of Cream Cheese and Strawberry Jelly and Mini Basil leaves with a Strawberry Tuile completed the canvas. The Basil Ice Cream was such a treat, it was mildly sweetened and the fragrant flavors of basil was prominent. Together with the slice of strawberry, jelly and cream cheese, it constituted the perfect bite. 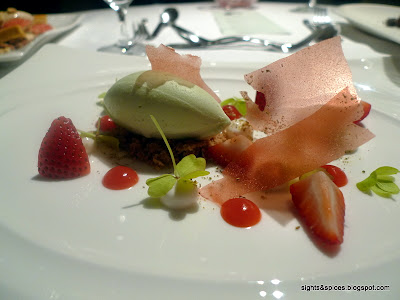 The Chocolate dessert was really interesting and unique, I've never seen this done by anybody before. On the menu it said 'textures of chocolate' and true to its description, there were different kinds of chocolate.The biggest surprise was that each texture has its own level of chocolate intensity, from milk chocolate to dark chocolate. We ate the chocolate by the order of its color starting from the lightest to the darkest.

The Milk Chocolate Cream was so smooth, the Aerated Light Brown Chocolate Bar felt like bubbles popping in your mouth, the Semi-sweet Chocolate Flan was incredibly creamy, the Crumbly Rough Dark Chocolate Bits was decadently bitter sweet and the Bitter Dark Chocolate Swirls just melts in you mouth. Aside from the chocolates, there was a fluffy light Cotton Candy which you can eat if you find the dark chocolate too bitter for your taste. And Ginger Ice Cream to clean your palete after eating each type of chocolate. This dessert was so cleverly conceptualize and executed.


After dinner, we ordered coffee, it came with two bite size pieces of chocolate cookies. My espresso looked promising, it seemed that it was gonna challenge the best cup of coffee I had the year before. The espresso was good but it wasn't as good compared to my favorite cup.


While having coffee, we asked one of the servers to ask Mr. Ignatius Chan, the man behind Iggy's, if we could have a picture taken with him. After a few minutes he approached us and in a very humble manner, he asked us if we could wait for a little while. We stood up and shook his hand and chatted a little. He proceeded to tell us that he has instructed the kitchen staff to clean up a little so that we can have our picture taken inside the kitchen together with his chefs. We felt so flattered and surprised, we went in and he introduce us to his head chef, A.K. I started to ramble how great the food was. A.K. smiled and thanked us, saying that he was glad that we liked the food.

After our fantastic lunch, it was hard not to compare the experience we had in L'Atelier and Iggy's. But in my point of view, it was unfair to compare both since both restaurants has its own strong points. Iggy's sophistication of being bare and minimalist was consistent all the way. The setting, the ambiance, the menu, the plating and the food, everything was simple. The phrase 'Less is Better' suits Iggy's perfectly.


Afternote:
During our small chit-chat, I congratulated Mr. Ignatius Chan for being ranked number one. And this is what he said: "Well, thank you! But you know I really don't pay much attention to the rankings. What's more important is that our guests like our food." I suddenly  remembered one of Anthony Bourdain's quotes in his show No Reservations. He was in Venice, Italy and he said..."In France the star of the restaurant is the Chef. In Venice the star of the restaurant is the food." Iggy's of course refers to the latter.
Posted by Yaj at 15:27