When I researched about the must eats in Siem Reap, I only found a number of must try dishes. It seems that Siem Reap doesn't really offer much, I just took note of the few must tries and decided to wing it. 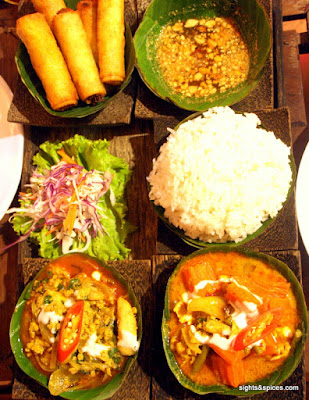 Our first meal was in a restaurant that our tour guide brought us to dine in. Initially I told him to bring us to a place where locals would dine. But since they get to eat for free here if they bring tourist in, I just reluctantly obliged to eat here. Prices were quite expensive for how the simple the dishes were, we had the Khmer Stir Fried Beef Curry and the Khmer Kako Chicken Soup. Upon looking at the ingredients used in cooking the dishes, it seems that both dishes will be packed with flavors. Since it contains different herbs and spices like galangal, lime leaf, garlic, lemon grass and more. It seems very Thai like but upon tasting both, we were utterly disappointed.

After a disappointing lunch, we went to Pub Street looking forward to a nice meal. One of the most mentioned places that I read about is the Khmer Family Restaurant. We went here to try out two famous Khmer dishes, the Fish Amok and the Lok Lak.

The Fish Amok is always mentioned as the must try dish in Siem Reap. It's basically a fish curry mixed with different herbs and spices, steamed and served on a bowl of banana leaves. I'm a big fan of curries, whether it's Thai, Japanese, Indian or Chinese. The Khmer curry tasted different, it leans toward the sweet side. I could taste the different herbs and spices but it was just too savory sweet for me.


Upon looking at the Lok Lak, it reminded me of the Beef Salpicao, served with a fried egg and white rice. But what makes the Lok Lak different is the very aromatic black pepper. The pepper used in this dish comes from the province of Kampot thus it's called Kampot Black Pepper. The pepper has a beautiful sweet aromatic smell and it didn't have that spicy harshness on the mouth. I just wished the beef cubes were more tender.

While strolling around we found a food cart, selling fried spiders, insects and snakes. Since my brother, Jim hasn't tried these before. We bought and tasted some. It was cooked and prepared the same way like the ones we saw in Beijing, deep fried and dusted with salt. Among all the exotic treats, my favorite is still the fried grasshoppers. Crunchy-ly addicitng!


When we visited the temples outside the main city, we stopped by of what looked like another tourist trap restaurant. But to our surprise the food we had were pretty good. On the menu, the ingredients used in each dish were listed. We decided to go for the Khmer Stir Fried Pork and the Khmer Sour Herb Chicken Soup.
The dishes were flavorful and I can taste the herbs and spice that was listed down. Upon seeing and tasting the dishes, the influence of the Chinese and Thai is so evident in Khmer cuisine.


We had a free day and decided to walk around and see what we can try out and eat. For breakfast, we found a small Vietnamese resto that was owned and ran by a Vietnamese expat. The bowl of Pho and glass of Cafe Sua Da reminded me the time when I visited Vietnam, it was so authentic and delicious.

For Lunch, we crossed the river and went to Peace Cafe. A vegetarian cafe, resto, trade shop and they even have cooking classes. We were saving space for dinner so we ordered something simple and light. We had the Squash Croquettes and the Veggie Burger. Both dishes were prepared and cooked really well though I felt that the dishes wont fool meat lovers. I love vegetables thus I  enjoyed how basic and 'healthy' tasting the dishes are.


For dinner, we had an amazing 6 course degustation meal in Cuisine Wat Damnak. Its one of my top reason why I would want to go back to Siem Reap.


After dinner we were already so full but there was something that we wanted to try, the Happy Pizza. Go around the restos around Pub Street and you can spot signs of the the said specialty. Happy Pizza is basically your ordinary pizza doused and topped with a special herb. A little tip, don't over eat,  a slice or two is enough!

After sleeping all throughout the whole morning because of the Happy Pizza fiasco, having lunch in Cambodian BBQ was the perfect meal to get rid off our hangovers. In this restaurant, they serve the Cambodian style of hotpot. On the center of the circular pot was where you grill the meat and on its sides is the clear broth. You grill the meat on the center and let the fat and juices of the meat drip in to the clear broth. Vegetables and noodles are also placed in the broth.


What makes this resto unique is the different types of meat that they serve. You can either pick the 7 kinds or 14 kinds of meat. The server told us that ostrich wasn't available but still we went for the latter. There were three dipping sauces, a citrus, a soy based and a peanut based sauce. 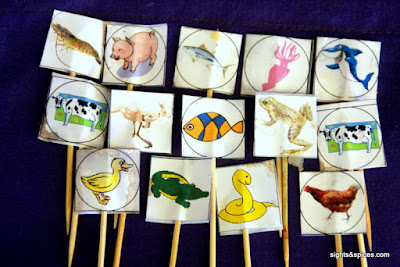 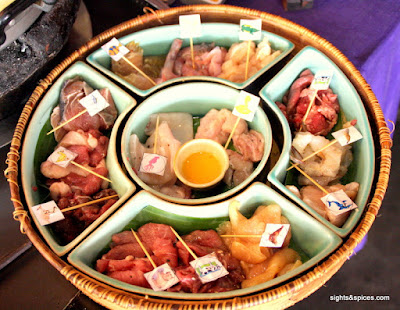 Our flight was back was late at night, we wanted to grab a bite before heading for the airport. We found ourselves wandering around the riverbank and saw food carts parked along the street. Though there were quite a lot of food carts that spread across the whole street, you can only find three types of food carts. One is selling drinks, one is selling pancakes/crepes and the last one is selling stir fried instant noodles.

It's hard for me to think of a word to describe the food culture and it's also hard to pinpoint a specific flavor that I'll remember about Siem Reap. What I'll remember about this place is what happened during and after each meal. I have to admit that Siem Reap for me is not really a place that I would go back to dine but with Cuisine Wat Damnak, it's a total different story.