After a few weeks of its opening, we decided to give the Italian restaurant a try. Reading and hearing that the place is run and owned by an Italian. I had nothing but high expectations of the place.


While choosing our wine, one of the owners and wife of the Italian chef/expat approached us and helped us choose the wine. While doing so, she informed us that her husband was not around to prepare the food but the kitchen was manned by cooks that was trained by her husband. We were so glad that we followed her recommendation for the wine. We had a bottle of the Clevasana Langhe Nebiollo wine. The wine was really good, aromatic, bold and has a good length.


Flavor wise, the Arabiatta was good, really simple and made well. But the biggest problem was the linguine pasta, it was way overcooked. The sogginess of the pasta totally ruined the whole dish.

The Margherita Pizza was decent but not impressive. The size was quite big and they didn't scrimp on the cheese. Though, I would have wanted the crust to be crunchier, it needed a few more minutes in the oven. I would also like it better if there were more fresh basil leaves on it.

The Filetto di Tonno was a big disaster. The tuna fillet was way overcooked, so overcooked that it had turned rubbery. The parsley sauce tasted good but I felt that it overpowered the natural flavor of the fish. I think it would be better if they serve the sauce on the side instead.

We were contemplating if we should have dessert after the below average meal. But when the server told us that the Tiramisu was prepared by the Italian chef/owner, we decided to give it a try. The Tiramisu was really good, the flavors of the rum soaked lady fingers and mascarpone cheesed were balanced and spot on. Something worth going back for.

After dining in Grande Torino, Ive read mixed reviews about this place. If based on what I experienced, I would have second thoughts of going back but after trying the Tiramisu, tt made me wonder. If the the Italian chef was around, would the food taste different? I guess next time if I do decide to give the place another shot, I'll make sure that the Italian chef is around. 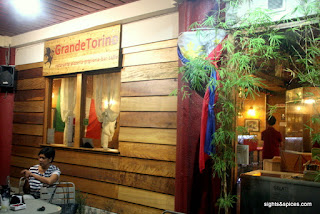