Its been a while since I last posted, I've been swamped with work and personal stuff that I had to do. One of the things that kept me busy was Sherbie, our beloved dog/little brother. When our mom passed away a few months back, my brothers and I talked about getting a dog. We wanted someone that would accompany and amuse our dad. We knew our dad like dogs, we thought it would be perfect for him in coping with the pain and sadness. Little did I know, how Sherbie affected each and everyone of us.


Timing couldn't be more perfect because the opportunity presented itself when a relatively of my brother's girlfriend was looking for somebody to give their 1 year old Shih Tzu to.  Luckily for us, that Shih Tzu landed on our hands, from being Herbie from his old home, we named him Sherbie. We had a new little brother and now there were four of us, Sherwin, Sherwon, Sherwan and Sherbie.


I must admit, it wasn't love at first sight. When my brother got him, he brought Sherbie to a dog groomer and was advised to shave all of Sherbie's hair since it was all matted and tangled. Moreover he wasn't perfectly healthy, he had fleas, a terrible visible ear infection plus he had lumps and scratches on his skin. In spite of his looks and health, I can still clearly remember the first time we met. He had this puppy look on his eyes as he stared at me. After letting him sniff my hands, I picked him up, laid him on my lap and that was the start of an indescribable bond I had with Sherbie.

Within a few weeks, Sherbie's health dramatically improved. His hair started to grow, ticks and fleas were gone and after getting used to his surroundings, he became more comfortable and became a little bit calmer. The joy and happiness Sherbie brought in to our home was so evident, we would hear our dad giggle and laugh again because Sherbie would lick and nibble his toes. Our home started to brighten up again because of him. From being an unwanted dog, Sherbie finally found a home where everybody loves him.


Dog owners would understand the fuzzy feeling of coming home to a dog's warm welcome. Sherbie has never failed to greet me every time I get home. As soon as he sees me enter the door, he would excitedly go towards me, jump up and down and try to reach for my hand. As soon as I sit down on the floor, he places himself on top my lap. He would proceed to lick my face, hands, legs and he would nibble my fingers. He also loves to have a rub down of his chest and belly.


On one very unfortunate morning, Sherbie decided to go on an adventure on his own, he stormed out of the front door, went down stairs and ran out of the building. Since I wasn't around, the people at home didn't know where to find him, he was last seen on the same street where we take our daily walks. Some mentioned that it seems that somebody might have picked him up. It broke my heart when I found out that he was missing, the pain of losing someone you love was again sinking in. As soon as I got back home, we went all out to search for him, went to dog pounds, animal welfare centers, printed a total of more than 700 posters and  posted everyday, I even consulted a psychic. It felt so hopeless and it was a long shot but still we pursued. The mood at home drastically changed, our dad started crying again and sadness started creeping in fast. I was thinking that if it's really meant to be this way, all I was hoping and praying for is that Sherbie is fine and being well taken care of.

After almost a month of continuous searching, a miracle happened. We got a text from someone saying he wanted to show a picture of a dog that they bought on the street. He claimed that after buying the dog, the dog was brought to Camarines Norte, Bicol (more than 350 kilometers away from our place). After a week, they passed by the same street and he noticed one of the posters. He tore the poster down, brought it back to Camarines Norte to compare the picture with the bought dog. He saw the resemblance and as his wife told me, he would look at the poster every night and feel sad about it. Written on the poster were the words, 'Lost Family Member'. Upon being egged on by his wife to tell his boss about the dog, he did so. When the boss who also was a dog owner and lover (he owns Dalmatians) found out about the poster, he asked him to confirm and return the dog to it's rightful owner.p


The kind man was Noel, he works as a driver of a politician in Bicol. I met him in our sgreed meeting place and the first picture he showed me was a close up shot of the dog's body, I immediately knew it was Sherbie. And as I browsed on the different pictures Noel took on his camera phone, I felt my knees weaken. Alas! We finally found him!!! Noel told me the exact details on how they got hold of Sherbie and he admitted that he wasn't really well taken care of but he promised me that he'll make arrangements to take Sherbie back to Manila.


After waiting for a couple of days, Noel texted and told me that Sherbie is on his way back to Manila. For the whole day I was anxious, excited, worried, paranoid and restless. When I was still posting around, I've always wondered if  Sherbie will still recognize me if we see each other again. My answer came when I went to fetch him in one of the bus terminals in Cubao, Edsa.

With me was Noel, his wife and their baby daughter. When I saw Sherbie from a few feet away, I immediately called him. As soon as he heard me, his head spun around and like a lightning bolt he dashed towards me. As I crouched down to hold him, he turned into a energizer bunny that's been set to turbo mode. He became wildly ecstatic as he kept on jumping up and down, kept on licking my face, hands and kept on nibbling my fingers As I was holding him close to me, people passing by started to look at us and I kept on hearing the words, "Grabe! tuwang tuwa yung aso, grabe!. (Wow! the dog looks so happy).  I just kept on holding him, on my mind I was telling him, you're safe now and we're going home. I felt my chest lighten up and my eyes started tearing up, our lost little brother is finally back in my arms.


After being gone for almost a month, after traveling back and forth for more than 700 kilometers and after going against all odds, he is back where he truly belongs. Sherbie is now happily back to his usual ways, he has gained his weight back and is now again ticks and fleas free after being infested when he was gone. In behalf of my family, I would like to thank Sir Noel for bringing our beloved little brother back to us. Your name suits you well as you've given us the best Christmas present we'll ever wish for.

Merry Christmas and a Happy Prosperous New Year to Everyone!!! 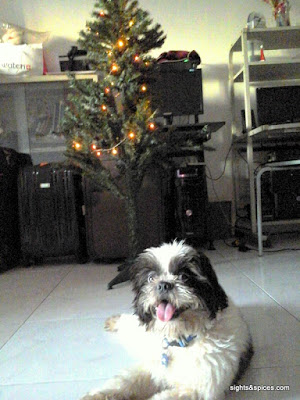