I've always heard from people who have beento Bangkok that there aren't much things to see or do in Thailand's Capital. According to them, Bangkok is basically temples and shopping. Moreover, I've been warned ahead of time that the city is filled with scammers. I got to admit that the main purpose of why I want to visit Bangkok is the food but little did we know that we were in for a very memorable experience.

I've been doing Muay Thai for a couple of years already and I wont pass on the chance to try out training in Thailand even if it was just a couple of hours. There are a lot of muay thai schools to choose from in Bangkok but we decided to try it out in Master Toddys. The gym is well equipped with all the facilities for training. From a boxing ring, punching bags, boxing gloves, weights, lockers and shower areas. 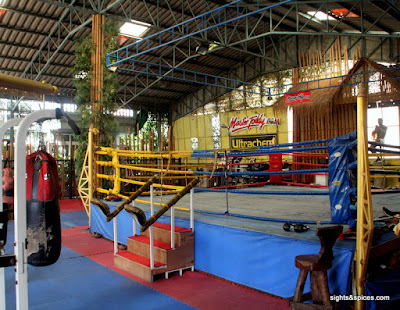 It was such a fun and learning experience. Jim learned the basics while I got to learn a few new techniques.

The night before, it was raining so hard while we were resting in our hotel room. Luckily, it was all sunshine the next day cause we were off to take long strolls outdoor. First stop was at the Grand Palace.

I've been to palaces and old government houses in Asia, the one common thing about them is the vast amount of land it occupies, it was all about the space. The Grand Palace is totally different, compared to other Asian grand structures, it didn't occupy as much space. But one thing is still certain, the word 'grand' perfectly suits it. Every structure inside was so colorful, glistening in gold and beautifully designed. 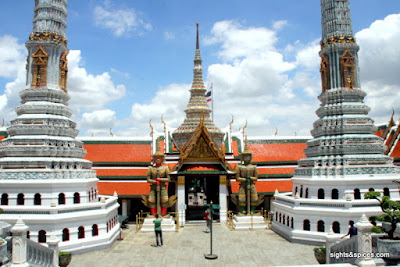 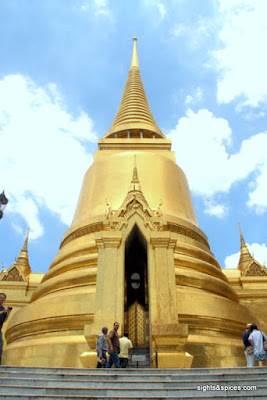 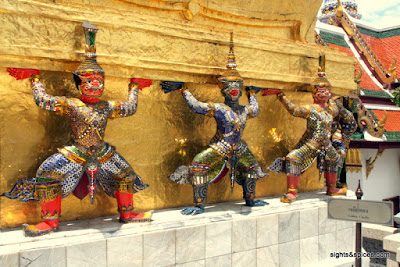 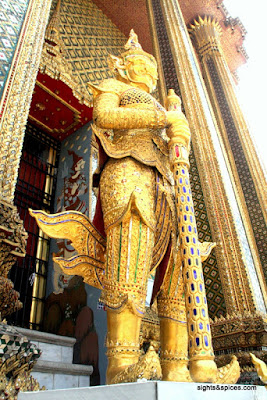 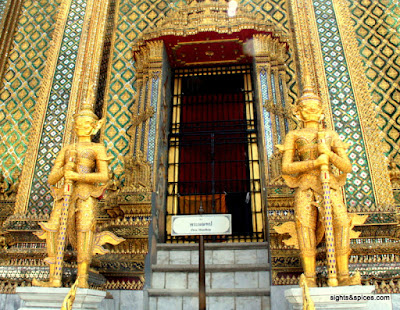 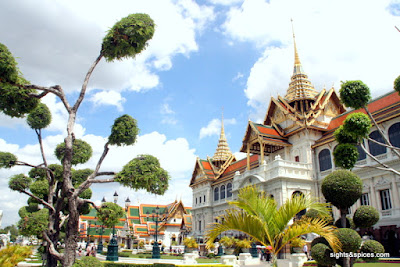 It was a good thing that there was a miniature replica of Angkor Wat inside. Cause we were off to see the real thing after a couple of months.


Nearby was the famous reclining buddha found in Wat Pho Temple. I've seen pictures of the reclining buddha before but nothing beats seeing the real thing, we were still amazed on how big the actual buddha is. 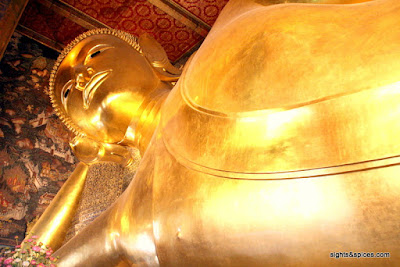 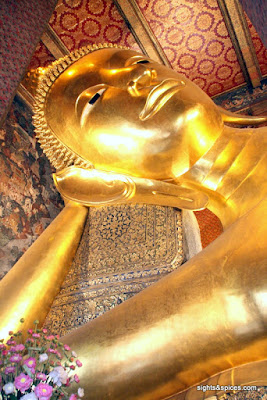 Inside the Wat Pho temple grounds one of the best massages we ever experienced. The Wat Pho style of massage is already known worldwide and you can easily find spas who does it back home but having it done here felt different. They exactly knew which pressure points to press, it hurts at first but after a couple of strokes, I felt all the tension being released all throughout my body.We initially wanted to have a full body massage but since the waiting list was long, we settled for a foot massage.

Here are the rates during our visit which was last September 2014. 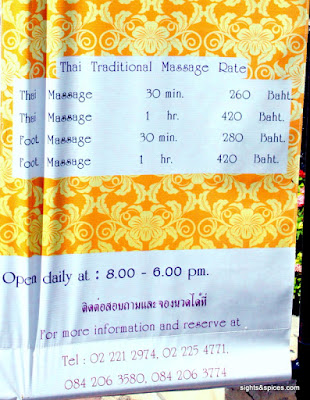 Feeling recharged after the massage, we decided to drop by Wat Arun since it was just across the river. It wasn't really part or our itinerary but we were glad that we passed by. After being treated to all the color and glamour of the Grand Palace, it was nice to see the opposite. The Wat Arun ruins is beautiful and charming on its own. Also known as The Temple of Dawn, the place is best visited late afternoon to view the sunset. 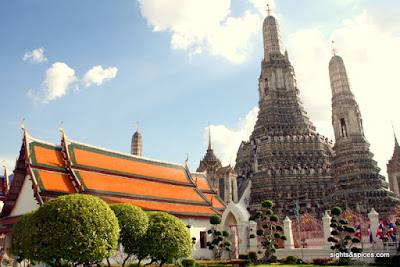 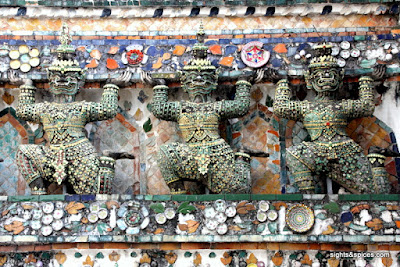 People can climb the very steep stairs up the Prang or tower, it can be challenging especially when going down.


I was contemplating if we should try to go to Damnoen Saduak Floating Market on our own or join a tour instead. After computing the expenses, put into consideration the time and convenience plus reading about the different scams of going here, I decided to book a half day tour from a legit tour operator. I knew it was going to be touristy but I really didn't mind, the place was really interesting, it was chaotic and organized at the same time. 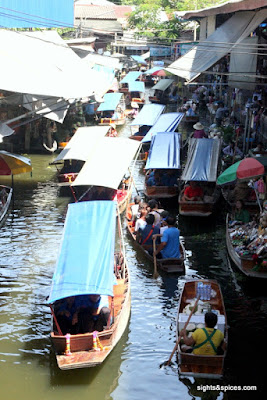 We didn't pass on the chance to get on one of the paddle boats to go around the market. We had to pay a fixed fee before getting on. As expected every thing that was being sold was catered for tourist and prices of the items here are marked up way higher than the usual price. We just bought food and ate it while we were cruising around. 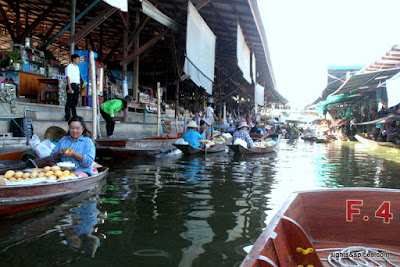 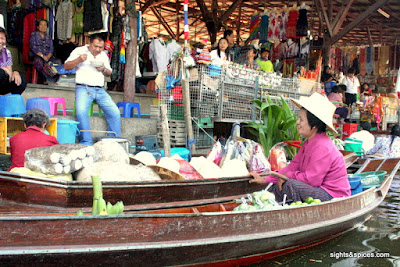 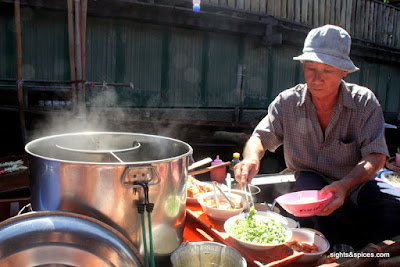 After the paddle boat ride around the market, we rode a motorized boat to go around the village.  It was really interesting to see modern houses, electrical cables running from one home to another and boats parked on their lawns. We couldn't help and wonder how people live their daily lives, the houses were built on stilts in the middle of a river.


One of the things that was a must do in my list was to watch a professional Muay Thai match. Upon doing some research, I decided to watch in Rajadamnern Stadium.The sad thing about watching it here are the ticket prices. Foreigners will be ask to buy tickets at a different counter, they will force you to sit ringside and normal prices for the ticket are 2,000 Baht per person.  Be ready to shell out around 1000 to 1500 Baht per person, it all depends on your haggling skills. 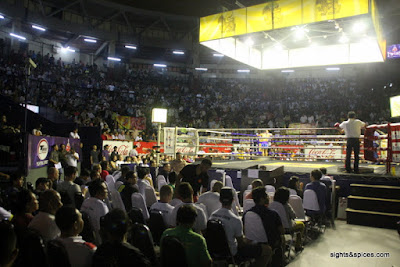 We were seated at ringside together with the other foreigners. It was quite fun watching the matches, you can see how fit and powerful the fighters were. 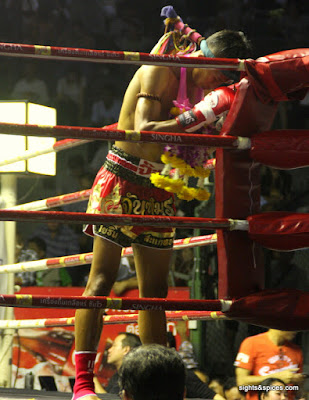 What's more interesting is the local crowd who were watching and rallying behind their fighter, they really get into the action. Every time a fighter throws and lands a knee, everyone would go "Knee... Knee..."


Normally the last place I'll visit when travelling is a mall but since we had time to kill, we decided to see the themed mall, Terminal 21. We were glad that we visited the mall, aside from escaping the heat outside, it was really unique to see what's inside. The design on each floor corresponds to what country it represents. Even the restrooms are themed, how cool is that?! 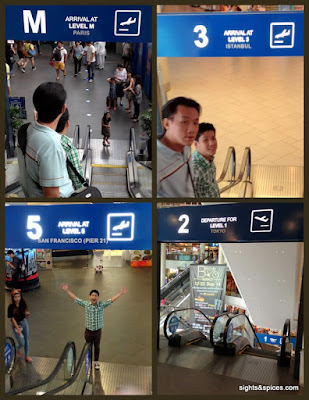 
I came across Escape Hunt in Trip Advisor, during that time there wasn't anything like this back here so we decided to give it a try. It was such a fun filled experience, it was like you are inside a video game. With the help of the lovely Ms.Ploy, we managed to solve the Murder Mystery room. 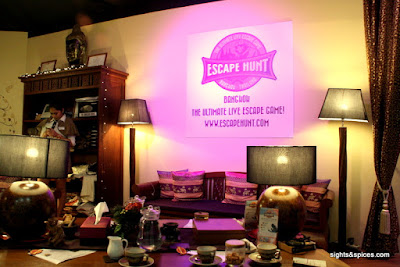 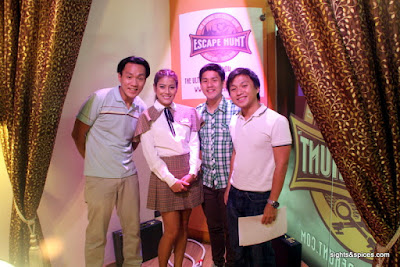 Travel Tip: Taking a taxi in Bangkok is relatively cheap, we were surprised to find out that it is cheaper for us three to travel around by taxi compared to taking the BTS or Bangkok Mass Transit System in the main city area. But if you're in a rush and don't want to get stuck in traffic, BTS is the way to go.

All  the things I previously heard about Bangkok was all true, it is a shopping mecca. We rarely shop on trips but this time around, we got to buy some neat stuff. There were scammers who would take advantage of tourist but this was pretty normal when you visit a foreign country. There were a lot more friendly locals we met who were always smiling, sharing stories with us and helping us out in times when we got lost. What  I'll fondly remember about Bangkok is the city's amazing diverseness. From the quirks and kinks of Pat Pong and Soi Arab, the grandeur of the Palace Complex and temples, the uniqueness of the floating market and village, the choatic busy streets of Chinatown and the luxuriousness of the 1st class malls, it is unforgettable. Most of the time, a city has a specific or certain 'feel' and impression. But when it comes to Bangkok, it was hard to pinpoint the exact impact it had on me. One thing is for sure though, I would love to go back to Bangkok over and over again.