Apo Island, an island frequented by divers because of the rich marine life. But I'm no diver yet. Though the water is crystal clear there's not much of sand and the shore has sharp rocks that it's painful to go barefoot. Electricity comes and goes throughout the day and there's no flushing toilet. Why come here? Pawikan or Sea Turtles!!!


Journey starts with a flight to Negros Oriental, from the airport take a cab to the Ceres Bus terminal. Take a bus that is bound for Bayawan and asked the conductor to drop you off at Malatapay Market. Walk the whole stretch of the market until you reached the end.

You have to hire a bangka or motorized boat to reach the island.

The boat ride takes around 30 minutes and if the waves are strong, you'll surely get drenched with sea water. As we were just about a few meters away from shore, the boatman pointed to a turtle peeking out of the water, it felt like the turtle was welcoming us into the island.


As soon as we docked, we led to a small office and we paid 100php fee for the conservation of the island and the rebuilding of the marine sanctuary. We were also told about the do's and dont's of interacting with the pawikan. Look but No Touching! Feeding them is also Prohibited!

The huge rock boulders on the side of the island caught my attention.


We settled and had lunch at Liberty Lodge. While eating we enjoyed staring out of the open sea and taking in the fresh cool breeze.

After lunch, we spotted a group of people who were already snorkeling. We could hear them shouting ecstatically, we followed suit and made our way to the waters. As I mentioned above, there isn't much of sand and the shore was filled with crushed corals and sharp rocks. I would suggest people to wear booties or sandals while walking around the shore and when taking a dip in the waters.


As soon as I dove down. I spotted two turtles near me and there were at least five turtles we saw on our first swim. I swam towards them and they kind of sleepily looked at me and just continued minding their own business which was eating. As we've been told the turtles liked to swim around the island because it is filled with sea grass, algae and seaweed, this is basically what the sea turtles eat.

It was amazing swimming with them, they even won't mind if you go near them.  They look so calm and gentle that it instilled a feeling of peace and calmness to me. 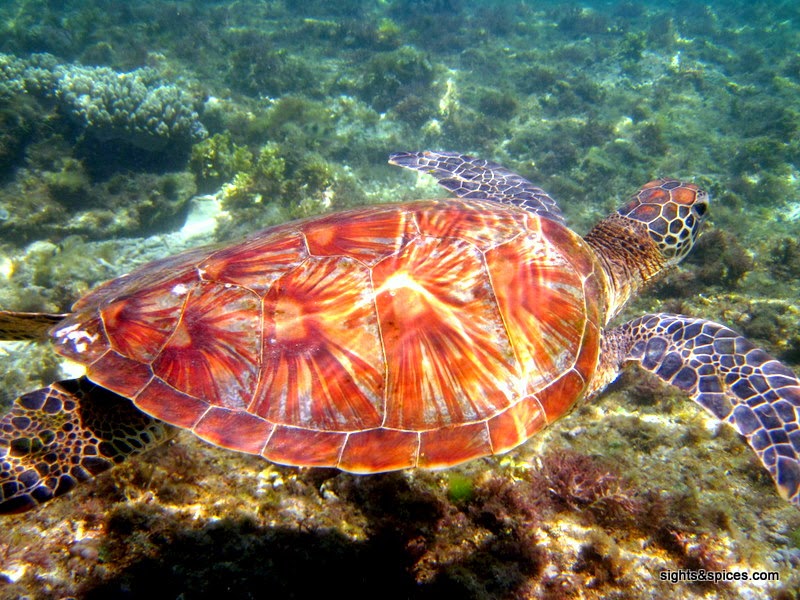 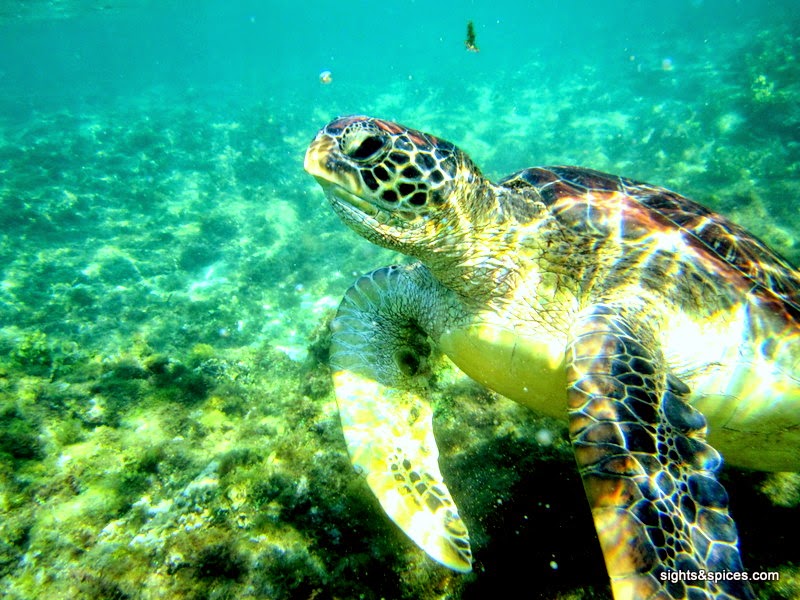 From a distance, I was trying to watch how they swim. They would flap their flippers and go up for air and as soon as they do, they would nose dive back down to the bottom of the ocean. This reminded me of big predatory birds who are hunting for food.


After watching the turtles, I tried to look around for fish. There weren't much but I spotted a few, I even saw a sea snake that we stayed clear off. 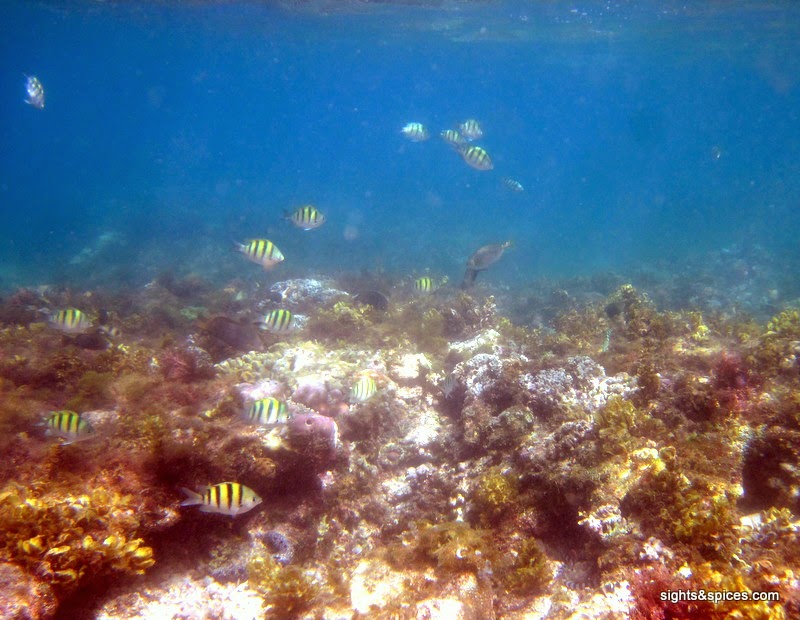 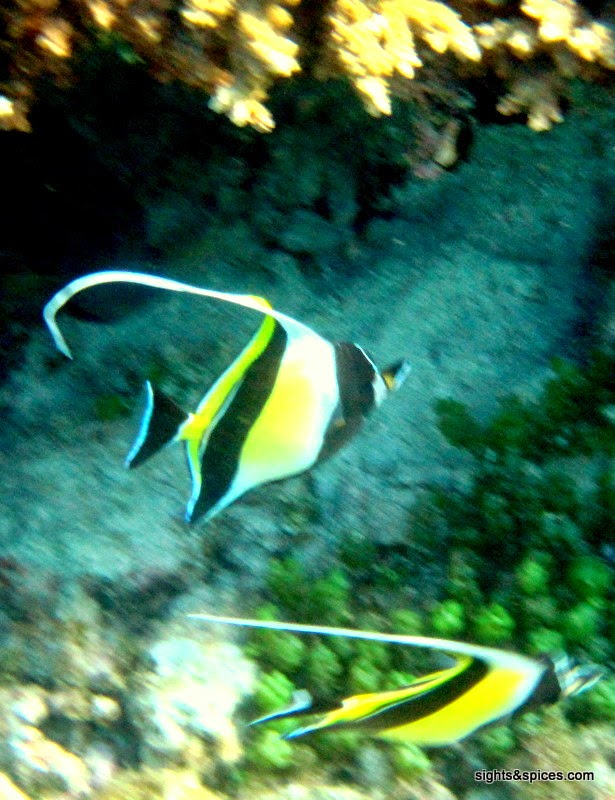 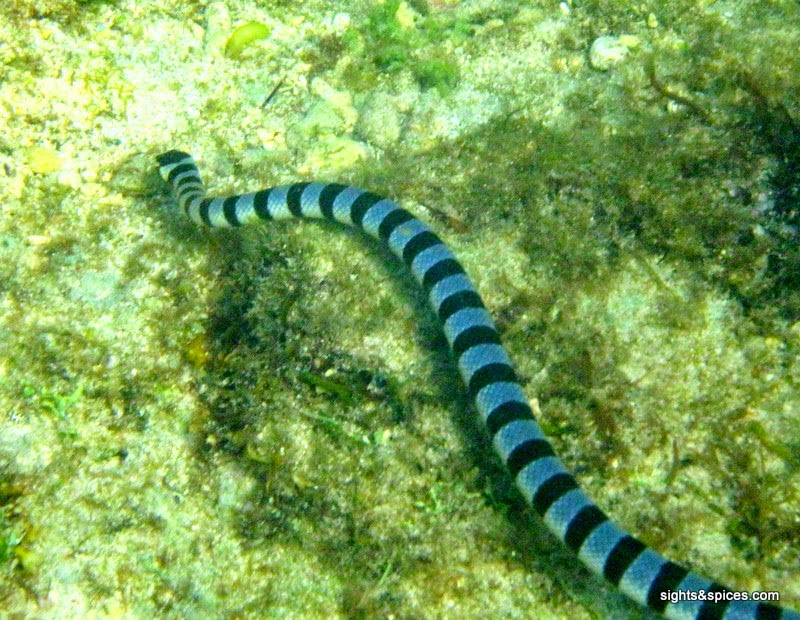 After swimming, we walked towards the marine sanctuary, it was on the other side of the island. As we were told, the sanctuary was once filled with colorful corals and reef fish but sadly after the island was hit by typhoon on 2011 and 2012. All the corals were destroyed and all that was left was a pile of rubble. The Marine Sanctuary is now temporary closed as they are now trying to revive it to the way it was before. 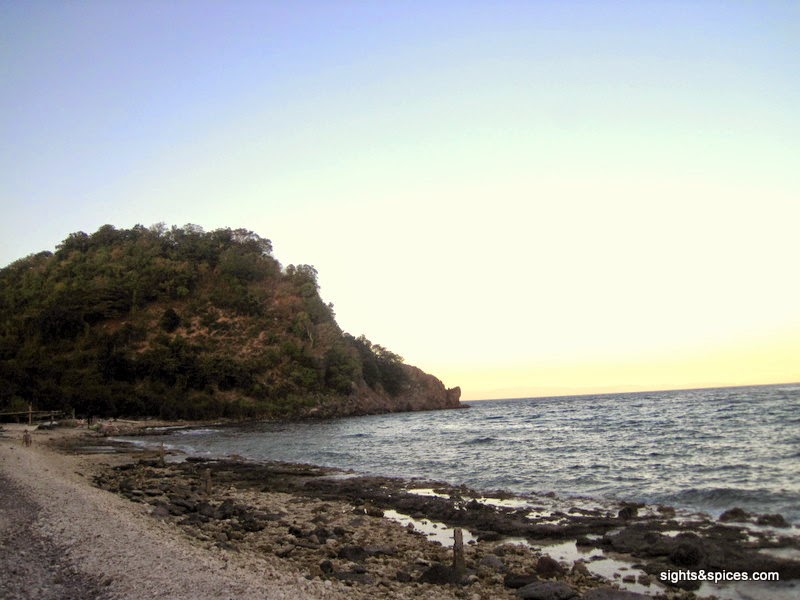 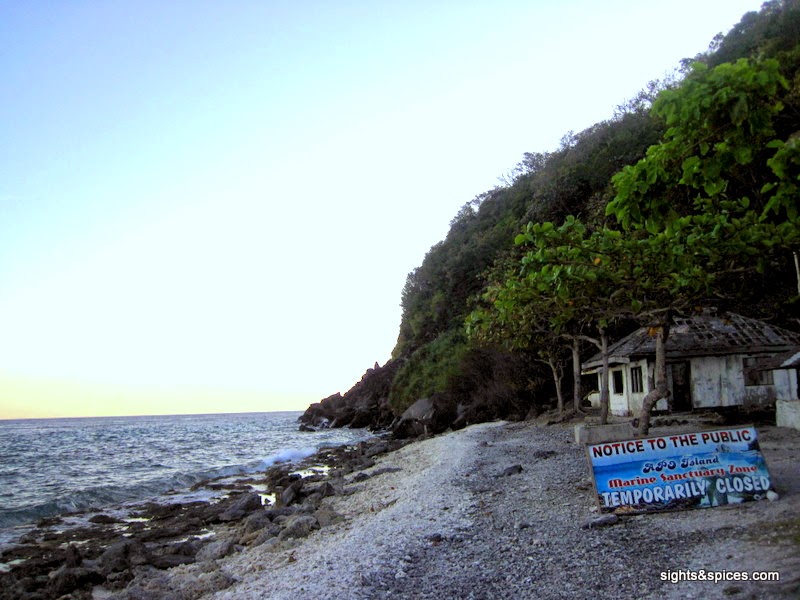 We headed for the lighthouse and along the way we were greeted by the warm smiles and hellos of the local kids. It started to get dark so we just decided to view the sunset from afar.


Before leaving for the island, we didn't waste the opportunity to swim with the turtles again. Here's is a short video clip of the experience.


I've heard stories of divers spotting turtles in the deep ocean, more often than not they would see one or two at the most. Moreover, they usually would spot them from afar and seldom times that they are able to go near them. I felt so lucky to be able to see, watch, swim and go near the gentle sea turtles. The experience is something that I'll cherish and never forget. 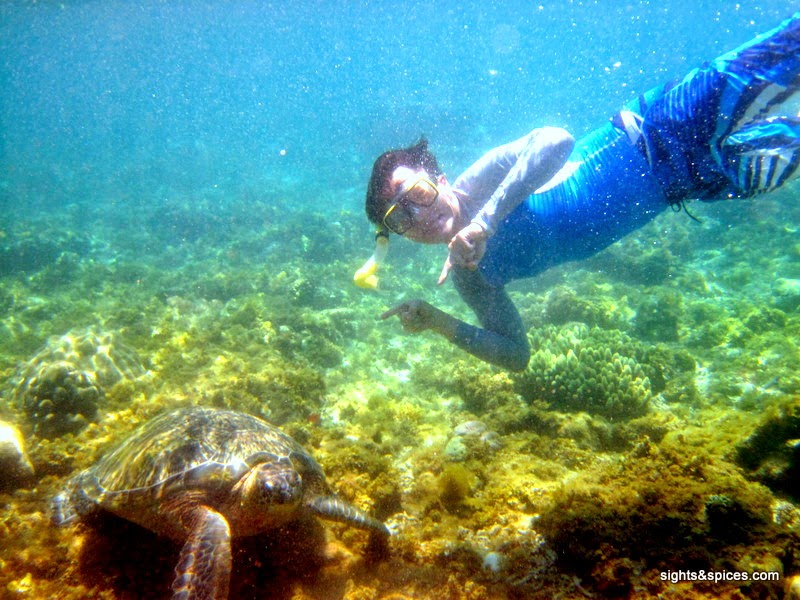 We got to talk with foreign divers on vacation and when asked how the marine life was below. They would smile from ear to ear and reply that it's one of the most amazing places they've seen. I'm no diver yet but once I learn and get the certification, Apo Island is part of my must 'go-back' list.