Upon the mention of German food, the words sausages and beer pops up in my mind. When we passed by the ground floor of Shangrila Plaza and saw how packed Brotzeit was, we decided to give the restaurant a try. Before entering, we were told by the receptionist that the restaurant is a franchise from Singapore, I really didn't mind where a restaurant comes from as long as they serve good food.


Aside from the different imported German bottled beers, they carry the Paulaner brand on tap.

I was supposed to get a glass of the regular wheat beer but upon seeing the different concoctions, I decided to order a 300ml glass of Russ'n. A concoction made up of Paulaner wheat beer and lemonade. Though I found it quite interesting and refreshing, it's still too sweet for me. I wished I just ordered the regular brew but for non-beer drinkers, this would be a good choice.

The resto has a very limited choice for wines, we had a bottle of Lindeman 2011 Shiraz - Cabernet wine.


To start of our meal, we had the Seafood Salad. The salad consists of lettuce, smoked salmon, seared tuna, shrimp, dried tomatoes, olives, zucchini and orange slivers topped with sour cream dressing. The salad was really nice, the ingredients used were all fresh and the combination of the flavors was spot on. Veggies and orange slivers were fresh, tuna was perfectly seared, shrimp was moist and the salmon really had that smokey flavor plus the dressing complimented each ingredient well.


The Salmon Fillet was served on a bed of sauteed spinach with balsamic glaze and served with parsley potatoes.

The chunk of salmon looked really nice with the grilled marks on top. Though the fish was a bit overcooked, the whole dish tasted nice. I liked how simple the fish was seasoned , spinach was tasty, balsamic glaze complimented the fish and vegetables well and the potatoes were moist and tasted of parsley.


I was looking forward to eating the Currywurst, the curry pork sausage looked promising. The sausage was a good foot long with curry powder on top and chili sauce at the bottom, served with potato wedges. But as soon as I cut a piece off and took a bite, it was downhill from there. The sausage was so disappointing, the texture and flavor was like a regular supermarket bought hotdog, it didn't even tastes like the premium ones. The only good thing about this dish are the fried crunchy potato wedges.

I was happy with all of the other dishes that I tried except for the sausage. It's always expected that when you eat at a German resto, you'll get to feast on good sausages. I haven't try all of their sausages yet but from what I tried, they really have to drastically improve the quality of the sausage. You can't be called a German resto without having great tasting sausages. 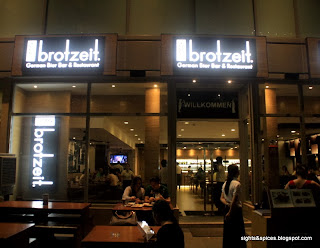