It was by chance that we found one of the most unique and astonishing museums that I've been to. It was after lunch at Gunther's when Jon spotted a signboard pointing to a toy museum. Right then and there we decided to visit The Mint Museum of Toys the next day.


We already saw a sort of toy museum/shop in Seoul, the place housed different toys that was collected by its owners. So when we went to Mint Toy Museum, we kind of expected to see the same stuff we saw in Seoul. But to our surprise, Mint Toy Museum was totally different and better. To compare the toy museum in Seoul was totally inappropriate.


.
At the entrance, the usher told us to start with the upper most level and make our way down to each level. The toy museum has five levels and each level has a specific theme. Level 5 - Outerspace, Level 4 - Characters, Level 3 - Childhood Favorites, Level 2 - Collectables and Level 1 - The Mint Shop.

As soon as we entered the museum, our jaws dropped. Floor to ceiling display shelves which contains numerous and numerous number of toys.

Not only were there a lot of toys, the age of some of it dates back from the early 1900's. Now this is what you can call a real 'Toy Museum'.


While looking around, we saw Mr. Chang Ya Fang walking and explaining stuff to his nephew. Mr. Chang is the owner and the collector of all the toys inside the museum. He asked us if we wanted to have our picture taken but I requested if we can have our picture taken with him. He happily obliged and after having our photo taken with him, he asked us if we wanted to walk around with them. We gladly said yes, we were about to be given a personal tour from the owner and collector himself, what luck!!!


Mr. Chang is so passionate about his collections, he knows each piece by heart and he would tell us little anecdotes of some of the toys. The very first thing he told us that every toy on display is still working. He then pointed out to a set of what looked like the same toy and said that no two toys are alike, everything on display is different from one another.


Being big Star Wars Fan, we were drawn to his collection of Star Wars Action figures, toys and oringinal movie posters. Mr.Chang mentioned that George Lucas was the first person to allow his toys to be mass produced. Though he said that he is not much of a big fan, he still keeps an awesome collection.

On the stairwell leading down to the lower level, a huge wall contained his collection of the most loved android robot, Astroboy.

Upon entering the Characters Level, we got so overwhelmed with the number of Batman toys and merchandise that was on display. Jon had a blast looking at each one of them, he's a fan. Did I mention that Mr. Chang told us that he thinks he has the largest collection of Batman toys and memorabilia around the world? 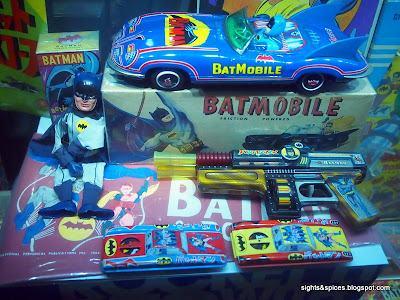 While Jon and Jim was ogling at the Batman display, I was at the Tintin display shelves looking and dying in envy with his Tintin Collection.I told Mr.Chang that I'm a big fan and I've collected all the comic books. He dragged me to a corner, pointed something and whispered.."That is an autograph first print comic book, that thing is worth $1000". All that I can mutter out was. Wow!

His Popeye collection might also be the largest in Asia. 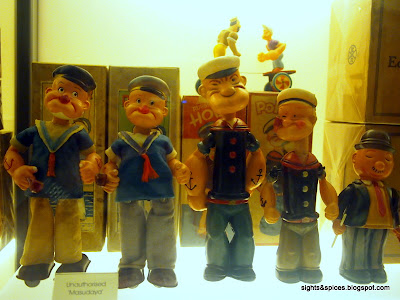 We enjoyed looking at toys with familiar faces, The Flinstones, Snoopy, Dennis the Menace, Tom and Jerry, Bugs Bunny, Yogi Bear and many more.

There were even some toys that were the only ones known to exist in the world. I asked him where he gets his toys from and if he still remember the very first toy he got. He said he still has in possession the very first toy he got as a kid. He has been collecting toys for so long that he couldn't even remember when it started. He mentioned he buys his toys from auction and or direct sellers from all over the world.

On the next stairwell going down, the display shelves house different stuffed toys. I was so amazed to see the same Steiff Teddy Bear I saw in the Teddy Bear Museum in Seoul. I knew that the word 'Teddy' was derived from US Pres. Theodore Roosevelt but I didn't know the story behind it. Luckily Mr. Chang was there to tell us the history behind the 'Teddy' Bear.

On the next level, all three of us enjoyed looking at the extensive Disney toys and memorabilia.

We were surprised when Mr. Chang told us that Walt Disney first character he drew was Oswald the Lucky Rabbit. He added that not many people know of this, specially the younger generation like us.

He asked us if we were familiar with Mickey Mouse, we said yes and we're actually Disney babies. He asked us if there are any mention that Mickey and Minnie are actually married. Everyone knows they are together but married? I don's think so, I don't remember watching anything that showed they were. Mr. Chang pointed out a tin can and said that that piece of unauthorized Disney merchandise might hold the answer. Mickey and Minnie riding a tractor with a 'Just Married' sign at the back.


Mr. Chang being a big Beatles fan had a wide array of Beatles figurines and memorabilia. 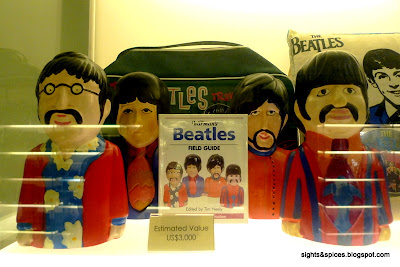 He also has collected all sorts of memorabilia of the Royal Family in England. 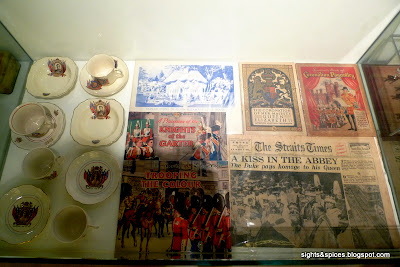 Would you believe that this Tumbling Toy came from the 1840s??? Wow!

The Smallest Fighters in the World Toy caught my attention. It's just as big as a matchbox.


Our tour ended in the dolls area, he told us that dolls aren't just girls. He showed us dolls he collected from all over the world. I asked him if he has a favorite theme or specific toy, he laughed and said that he has been asked the same question over and over again. He replied that his toys are like his children, he loves and put importance to everyone of them.


He introduced us to his wife and Mrs. Chang told us that we were so lucky to bumped into her husband because he rarely visits the museum. Mr. Chang told us to come back again because every after a couple of weeks, his other toys in his warehouse takes the shelves.

Before saying our goodbyes, I asked him what attracts him to a specific toy, what makes him buy and want it. He mentioned three different considerations, rarity and price are two of them. But the most important to him is how a toy brings about a certain joy and happiness within him. He continued to explain that toys are made to be played and enjoyed, collecting it is just secondary.


He gave us a few advice if we want to start our own collection even if he discourage it since most toys nowadays are mass produce. He suggested that we stick to a specific theme so we can build up on that particular toy and more importantly he reminded us to play and enjoy the toy.

We thoroughly enjoyed our visit to The Mint Toy Museum, we felt like being kids again while looking at Mr.Chang's toy collection and listening to his stories. I forgot to mention that MINT actually stands for Moment of Imagination and Nostalgia with Toys. And this is actually what we experienced, for those couple of hours, we had no worries and were smiling from ear to ear. The feeling was like opening a new toy out of its box for the first time.