I can still clearly remember how the sausages looked, smelled and tasted in Mickey's Deli in Jupiter St., Makati. It was one of the best places to feast on scrumptious sausages but sadly Mickey's has long been closed down. When I heard about Poco Deli, a deli that's said to serves sausages like the ones in Mickeys, I got excited to try the place out. Owner, Ms. Joy de Leon used to work at Mickey's, she learned the process of making sausages from there. Right now, the sausages that Poco Deli serves are her proud creation.

The deli was relatively small and the place was packed for dinner. Aside from the sausages, the deli also offers a variety of other dishes. On the end wall, a display of  wines caught my eye. Majority of the wines that the deli sells comes from Spain.


We started our meal with a  2009 Campabarro Crianza Temparanillo. The wine was pretty good, full bodied and since this is a Crianza, the flavor was simple and smooth.


For non-wine drinkers, one can choose a beer from the different foreign beers that the deli carries.


We ordered a single serving of the German Sausage and Cheese Platter. One can choose three sausages from Keilbasa, Chicken, Bratwurst, Nuemberger, Bockwurst, Frankfurter, Cheese Krainier. There was also a choice of three kinds of cheese from Gorgonzola, Goat's, Pecorino, Padano, Emmental and Manchego.
A side of Sauerkraut and Bagel Chips was served on the side.

The sausages were exquisitely good, it was packed with so much flavor and the casing had the 'snap' that I like in a sausage. I apologize for forgetting the kind of sausages and cheese that I got to try out.


Sauerkraut is  fermented cabbage that is usually eaten with meat and or sausages. The homemade sauerkraut which they also sell was indeed the perfect companion for the sausages. The sour flavor of the cabbage brought out the sweetness of the meat.


Aside from Sausages Platter, we also tried out their Chili Seafood Pasta.

The pasta dish tasted just ok. I was disappointed with the pasta since it was overcooked. The pieces of fish and shrimp were cooked well, the Pomodoro sauce tasted nice though I didn't sense any spiciness in it. 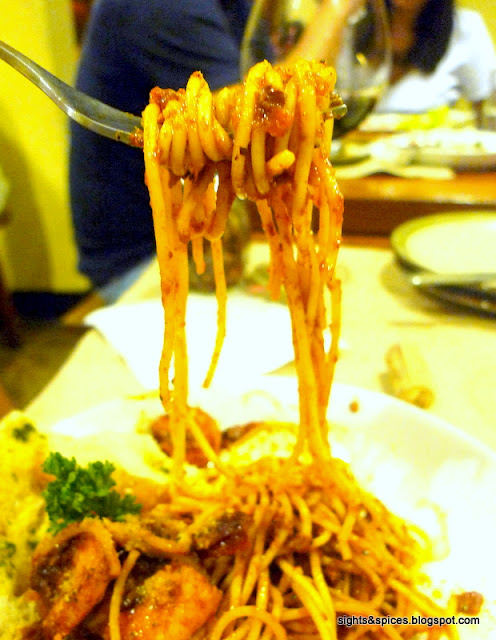 The deli has a variety of cakes, we decided to try out the New York Cheesecake and Cappuccino Cake. The Cheesecake tasted ordinary though it was better then the store mall variety.

I really liked the Cappuccino Cake. This is not the chiffon soft and moist type of cake, it was thick and dense. Initially I was taken aback on its texture but after a few bites I really enjoyed how it melts inside my mouth. The best thing about the cake is the aromatic flavor of coffee which was so eminent.


We also had a cup of their Coffee, it tasted decent. I asked the server what brand they carried and from where the beans came from and all they told me is the brand, Midnight Blend. They had no idea where it came from.


The sausages are definitely something that is worth going back for. As of the moment I can't think of another resto or deli who makes delicious sausages like Poco Deli. With so much other stuff to try out, I'm certain that I'll be back again. 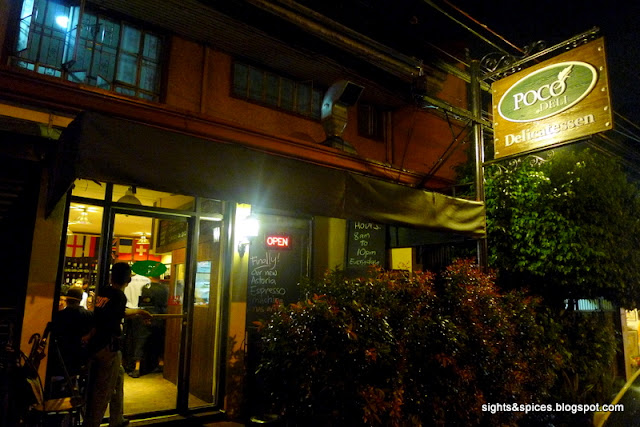