After hitting the waves in Kuta, there were two options to where we would have our late lunch. The first of which made it to the Asia's top 20 list for this year and the next option was Ku De Ta. Having seen features and hearing great things about the latter, we headed to Hotel Oberoi.

Ku De Ta has been consistently making the cut in the Miele Guide's Asia'a Top 20 for the previous years. Aside from being a wine and dine place, the restaurant can also be a lounge, a bar and a club. Before coming here, I was skeptical on how everything can fit in one place. But upon walking and looking around the different areas, I became a believer that the concept of having a resto/lounge/bar/club all together can actually work. The whole place was just gorgeous.


Ku De Ta has a weekly lunch set menu that changes regularly. There were two choices for the entree and main course and a single dessert.


A complimentary bowl of bread and olive oil was served.


Aside from having the three course lunch set, we ordered a No Kisses for You Tonight Pizza. A garlic confit pizza with Parmesan and Mozzarella. The pizza tasted satisfactory, it was decent but not great. The crust was not to my liking and I was looking for more of the garlicky flavor. 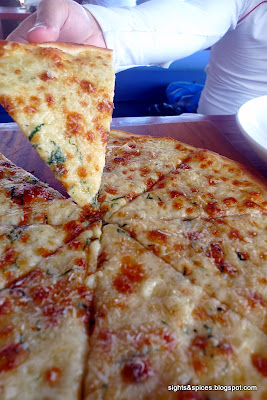 The first entree was Tomato Gazpacho, on top of the soup was a micro herb salad and a piece of sourdough bread. I really hoped they just put the bread on the side instead of putting it on the soup. The chilled gazpacho was perfect for the scorching sun. Though we had to add a tinge of salt in it, the soup was great, it tasted sweet, savory and refreshing.

The next entree was the Shaved Baby Squid Salad. Chopped squid with julienne strips of vegetables on top of Vermicelli noodles, it was doused with a dressing of Nuoc Cham which is a Vietnamese dipping sauce. The squid was tender and the vegetables strips were fresh and crunchy  The sour, sweet, citrusy dressing was so good, we just had to add a tinge of salt. The salad dish was light and refreshing, perfect again for the weather. 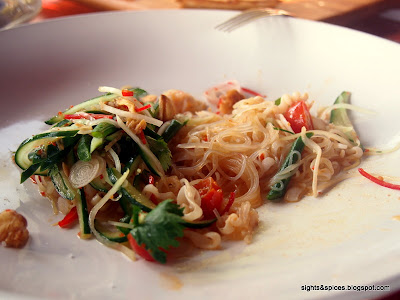 The first main to be served was the Hand Made Parpadelle. The fresh pasta was cooked to an 'al dente' perfection. The sauce was simple and hearty, it consists of wild mushrooms and sage sauteed in olive oil. If only it had a little drizzle of truffle oil on it, this would have made the pasta dish divine. We had to add a tiny dash of salt to the dish to bring out more flavor in it.


The other main which is the Herb Crusted Pork Loin took a while before it was served to us. We followed up our other three times and it took more than 20 minutes before it came out. I don't have any idea what happened, the servers just kept telling us that it was coming. The long waiting time was my only major gripe about this place.

The Herb Crusted Pork Loin was served with a celeriac remoulade on top and with a side of smoked potato puree. The herb crust was a bit under seasoned, it needed more salt in it. The pork loin was delicious, it was so soft and tender. The smoked potato puree tasted satisfactory, it didn't have the smokey flavor as it claimed to be and we felt that it was kind of dry. What I really like about this dish was the celeriac or turnip salad, the nutty, citrusy and tangy flavor of the salad complimented the pork loin really well.


The dessert was a simple Vanilla Creme Bulee served with two mini lemon cupcakes on the side. The Creme Bulee was perfect, it had the right balance of sweet and citrusy flavor plus the caramel on top cracks like how it's supposed to be. The Lemon Cupcakes was divine. We all loved how soft and moist it was, it had that melt-in-your-mouth texture. It tasted of lemons and it left a tangy feeling in your mouth. I really liked the combination of the two desserts. As soon as I took a bite off the cupcake, it leaves a warm tangy feeling on my palete. I would then grab a spoonful of creme bulee and let it swirl and melt inside my mouth, it was perfect.

There was one common denominator for the dishes we had. As you might have noticed, we always had to add a dash of salt on the entrees and mains. We felt that the dishes was under seasoned, I reckoned that this was done intentionally. Since the beach was just beside the dining area, most of the diners would order and eat immediately after getting out of the sea. As for us, we had to walk and take a cab ride before getting here, it desensitize our paletes of the salty feeling from the sea. The food was wonderful and well thought of, I tip my hat off to the chef for his clever choices of food to be served. The food complimented the ambiance, atmosphere and most specially the weather. 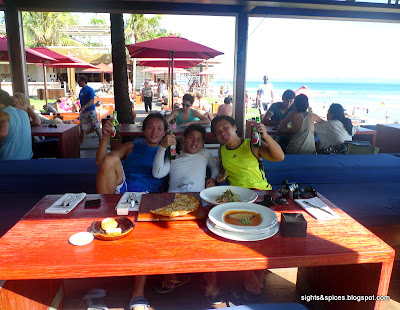