Joel Robuchon...to foodies like me, it's impossible not to know him. A celebrated chef who has written several cookbooks, has hosted cooking shows, he owns different restaurants all around the world which has earned him Michelin stars. To top it all off, he is considered France's top chef of the century.

L'Atelier de Joel Rocuchon is a french resto located at The Landmark Hong Kong. It was named Asia's Best Restaurant for 2009-2010 by The Miele Guide (http://mieleguide.com).

It started out as a casual joke that I never thought would actually happen but thanks to my cousin Achi Leslie, (www.shootfirsteatlater.com) one of my dreams came true. Thanks to her and Ms.EMC for making it a reality. I hope I'll be able to return the favor soon. I apologize for the poor photos, there was poor lighting and I had a hard time with the point and shoot camera I used. 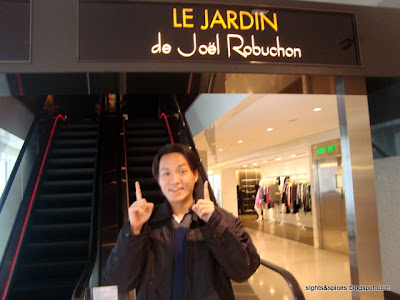 Entering the restaurant, the first thing that you would notice is Black, everything is in black.The walls, tables, chairs and the uniform of the servers. It exudes a very elegant, chic and elite vibe. Upon being seated at the bar, different kinds of complimentary bread with a block of rich and silky butter is served. 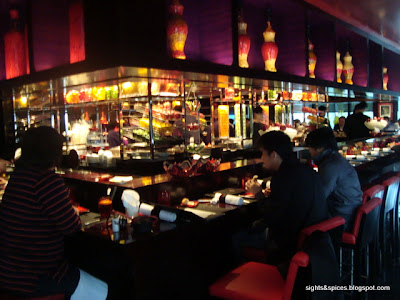 The breads were a treat. Dinner roll was soft and moist, croissant was flaky, sour dough has the perfect balance of sourness and sweetness but the one thing i fancied the most was the bread shaped like a wreath. As you pull out each leaf and take a crunchy bite, the surprise was inside..there was a piece of bacon in each leaf.


You can choose from two menus, the menu bar or the main dining room menu. We were treated to the menu bar, a person would have to shell out HK$ 390. It was a four course meal that includes an amuse bouche, an apertiff, a main course and a dessert. One can select different choices from the menu and pair your courses to your hearts desire... 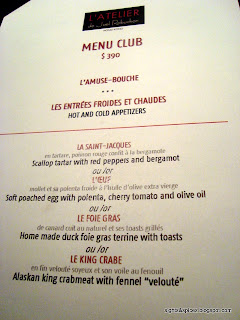 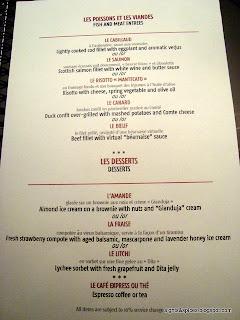 The Amuse Bouche was presented in a nice glass plate with a cracked egg shaped bowl on top. It was a carrot soup with mango puree and foie gras custard at the bottom.

The initial thing that hits me was an amuse bouche was supposed to be eaten in one bite and this course was just supposed to tingle or amuse your palete.. The combination of all the ingredients in this dish was so rich and flavorful that this definitely cannot be considered as an amuse bouche. I'm not complaining though, it tasted great. The saltiness and richness of the foie gras compliments the sweetness of the carrots and mangoes. It leaves you begging for more. A glass of Chardonnay would be the perfect match, the sweetness of the soup would compliment the dryness of the wine. 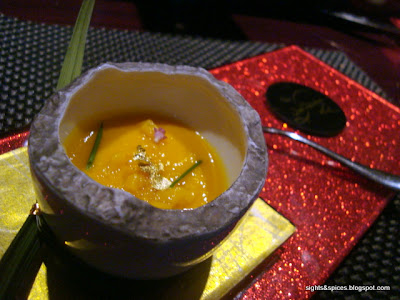 The scallop tartar dish came out literally smoking, it was cleverly presented on a plate of dry ice depicting an impression of freshness. The scallops were indeed so fresh, it was juicy and sweet. The dish tasted pleasantly simple. Using Bergamot made the dish taste just right, it didn't leave a piercing sour after taste. A nice glass of Zinfandel or a sweet Sauv Blanc would be the perfect match for the tartar.


Dining in a French resto wouldn't be complete without eating foie gras. Since the foie gras was already mixed with the terrine, it didn't really give you a melt in your mouth butter feel. Though this was the case, it still tasted superb. The duck liver delicately tasted sweet, salty and bitter. An Australian Shiraz is the perfect match for the dish.


Veloute is one of the four basic sauces in French, Its made up of equal parts of flour and butter with a light soup stock. The word Veloute means velvety, the dish tasted light and fluffy making it indeed taste like velvet. Together with the sweet fillet chunks of Alaskan King Crab, a nice bottle of Sauv Blanc is the perfect company for this dish.


Among all the main courses we had, this one was my least favorite. I felt the risotto was not cooked to my liking, it wasn't creamy enough just like how I want my risotto to be. Though the flavor was delectable, the strong scent and taste of cheese was in the dish. I'm not sure what cheese they used but my guess would be Gorgonzola and Parmesan. I would pick a fruity semi-sweet Sauv Blanc to pair up with the dish to balance the saltiness of the risotto.


Upon researching what verjus is, i was surprise to find out that the major component of the sauce was grapes, initially I thought the flavor came from sweet vinegar and lemons. Though verjus has lemon in it, the grapes' sweet and sour components gave the sauce its major character. The sauce was just splendid, it tasted divine with the cod fish which was cooked to perfection, moist and tender to the last morsel. A bottle of Sauv Blanc Semillon is the recommended pairing for this dish. The dryness and saltiness of the wine will bring out the sweetness of the verjus sauce.


This dish brought the house down, it was everybody's "guilty" favorite. The dish was so rich and succulent, shreds of flavorful braised duck meat layered with butter-rich mashed potato and top with Comte cheese. Just imagine chewing and tasting everything at the same time, the flavor and richness of the dish bursting in your mouth, it was absolutely heavenly. Two kinds of wine comes to my mind in pairing up with this dish. Its either a Pinot Noir or a Shiraz. Both wines are flavorful that enough to compliment the richness of the dish. 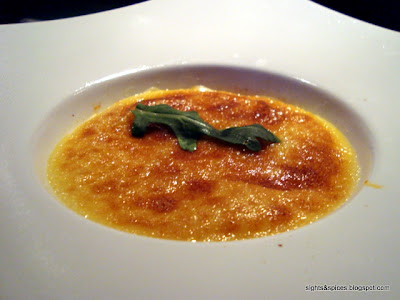 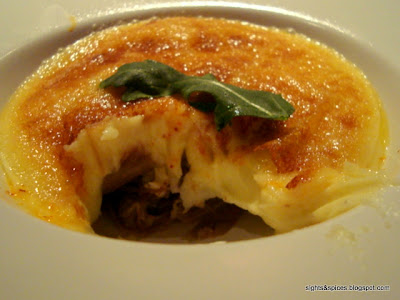 I'm not really a dessert person but just looking at the 3 dessert, it was hard to resist such an artwork. It tasted just like how it looks, grand and magnificent. Choosing the lychee sorbet and strawberry compote was the perfect way to cleanse your palete, it was refreshing, simple and light.


The Strawberry Compote with the aged Balsamic tasted interesting. It tasted pleasantly sweet, salty and sour at the same time. I'm pretty sure that they let the aged balsamic reduced in a pan to bring out the sweetness of the vinegar. The Lavender ice cream tasted floral and fruity, the dairy ice cream complemented the Strawberry Compote really well.


For chocolate lovers, it will be hard to snub the brownie. For a non-chocolate lover like me, I absolutely adore the brownie, if there would be more of it I'll gladly partake on eating it again and again. As Achi Leslie pointed out, anything chocolate that Robuchon serves, it is absolutely a spectacle to the taste buds. Among the three desserts, it's also the one that is perfect for the espresso.

Upon seeing my espresso, my eyes widened and I started to salivate. The first sign of a great cup of espresso is the crema on top, the crema was so thick and frothy. As I took a whiff of the hypnotizing smell and have my first sip, i heard a voice in my head saying "OH YES! this is the best espresso you ever had." The Espresso also came with Petite Fours. Macaroons, Fruit Pastilles and Chocolate covered Corn Flakes.

Even after emptying my cup, the crema was still as thick and frothy as ever, now that's an excellent cup! I asked the server from where the coffee beans are, expecting to hear him say something Italian, I was surprised to find out that they use 3 kinds of beans. A Kenyan bean, a Sumatran bean and a Japanese bean. He also added that Joel Robuchon is very picky about his coffee, it's no surprise at all.


Dining at Robuchon is something that you'll never forget. The food was absolutely top notch, ingredients was fresh and the flavors was exquisite. Imagine a full band of orchestra playing in your mouth, the string section provides the soothing taste of sweet, the horn section provides the exciting taste of sour and bitter and the percussion section gives you the thumping feel of texture. Till my next meal...bon apetite!
Posted by Yaj at 15:37